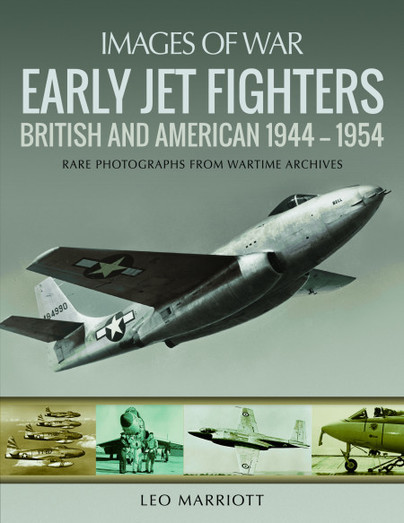 Click here for help on how to download our eBooks
Add to Basket
Add to Wishlist
Get Early Jet Fighters (ePub) for FREE when you purchase 2 other eBooks.
Need a currency converter? Check XE.com for live rates

In almost 200 archive photographs Leo Marriott traces the course of the development of British and American jet fighters during the first pioneering decade of their production. In many ways the period from 1944 to 1954 was one of the most exciting and innovative in the history of military aviation. Rare images show the first jet fighters flown by the RAF towards the end of the Second World War and takes the story forward to the most advanced designs that played a key role in the war in Korea. The range of experimental and operational warplanes that were conceived and built during this short time was remarkable.

The initial straight-wing jets began with the Gloster Meteor and Lockheed P-80 Shooting Star which were later superseded by the first operational swept-wing fighters such as the Hawker Hunter, North American F-86 Sabre and Grumman F9F-6 Cougar. Development of all these benefited greatly from German Second World War advances in aerodynamics that were exploited by the British and Americans when the war ended.

Progress was so swift that, by the mid-1950s, the prototypes of the next generation of truly supersonic fighters were starting to appear, and these are featured in Leo Marriott's fascinating selection of images. He even includes a variety of prototypes which for various reasons did not result in production orders, as well as several unusual concepts such as flying boat fighters and mixed-power designs.

Early Jet Fighters: British and American 1944-1954 is a graphic and informative introduction to an extraordinary stage in the evolution of the modern warplane.

In softback format and reasonably priced, this book provides a fascinating insight into a period of unparalleled aircraft development. The author provides a fulsome tribute to British ingenuity and the debt owed by the USA to early UK designs.

Rare images show the first jet fighters flown by the RAF toward the end of World War II and takes the story forward to the most advanced designs that played a key role in the Korean War.

This new addition to the ever popular Images of War series is a really good one...

I think the aviation historians along with modellers will enjoy this one, telling the story of such an important period in the history of jet aircraft development and with some rare photos which provide some great detail.