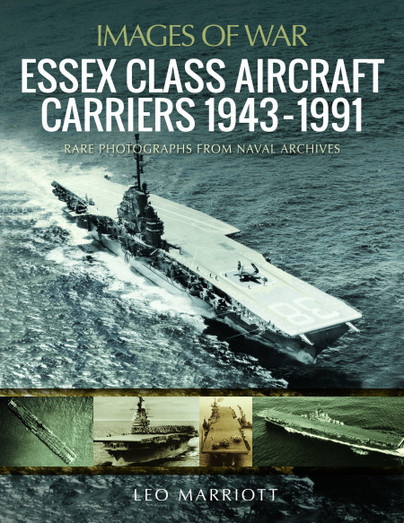 "This is an excellent well produced book and one that despite the well-trod nature of the subject matter has something new to give to both new and older readers."

Leo Marriott has numerous naval books to his credit and this one follows the tried and tested pattern for this series of books with a wealth of rare photographs culled from a variety of national archives and each given a full description. The author’s extensive knowledge of the subject is displayed in text with full descriptions of the development, construction, and deployment of the Essex-class vessels. This is an excellent well produced book and one that despite the well-trod nature of the subject matter has something new to give to both new and older readers.

Of the HNSA fleet’s five aircraft carriers, four, Yorktown, Intrepid, Hornet, and Lexington are Essex class. This book belongs not only at these carriers’ sales desks but at every HNSA retail outlet.

Subtitled Images of War and Rare photographs From Naval Archives, Marriott’s book has 211 photographs in its 164 compact (8x10 inch) pages. They are well chosen and reproduced with insightful captions and text.

After an introductory chapter on carrier development from 1919, seven chapters; Essex Class Enter Service, Across the Pacific, Aboard the Essex Class, Through Kamikaze to Victory, The Post-war Era and Korea, Steam and Mirrors, and Submarines, Spacecraft and Vietnam cover the service of the class before a Postscript sums up each vessel’s life.

This is an outstanding book.

"...provides an excellent introductory pictorial look at the operational life of the Essex-class aircraft carriers."

This book from publisher’s pen and swordis part of the images of war books which I have to say are remarkably interesting and full of pictures that will inspire people to investigate the series of images of war. For the modeller’s, this book I feel will have many of you chomping at the bit to build scenes, in the form of a diorama from various pictures that you will see in the book. The book like all the images of war books is quite easy to pick up and read there was so much information in this book that I had no idea off, some of the information that I found fascinating like the work involving the location of spacecraft and astronauts, I had completely forgotten that in those early pioneering years they did not land on a runway and therefore the safest option was for them to land in the sea, needing recovery by ships. All in all, a particularly good read from start to finish and a book I would recommend to anyone interested in World War Two aircraft carriers through to the end of the Cold War.

... this little photobook nonetheless offers a fine selection of period photos with a few gems, such as hangar catapulting on the first six ships or the recovery of astronauts.

A great addition to the series and one that can be easily recommended.