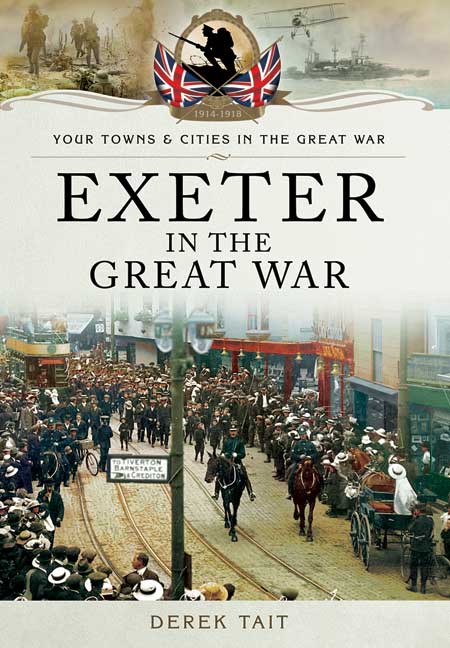 Exeter in the Great War (ePub)

Click here for help on how to download our eBooks
Add to Basket
Add to Wishlist
You'll be £4.99 closer to your next £10.00 credit when you purchase Exeter in the Great War. What's this?
Need a currency converter? Check XE.com for live rates

Exeter played a vital role during the First World War supplying men for the Army and raising funds to help troops overseas. The Mayoress and her team played a key part collecting money to aid homeless Belgian refugees in the city while also supporting other worthy causes both home and overseas. Soldiers travelling through Exeter all received food, refreshments and cigarettes due to the money raised. The city had its own battalion, 'Exeter's Own' and thousands of servicemen passed through the city on their way to northern Europe. Players at Exeter City football club were amongst the first to join the Colours and later the Footballers' Battalion (the 17th Battalion Middlesex Regiment).

[The author's] extensive research through a range of newspapers, along with carefully selected extracts, bring to life the existence of the citizens of Exeter during the war years, and the sacrifices and comradeships through an uncertain period. The use of a range of photographs from the war years illustrate the text and gives an insight in to the life of the city and its people.

This powerful account of a city that showed great courage and determination in a time of adversity ensures that Exeter's people, who lived through four intense years of conflict, are remembered for their immense contribution towards the war effort.