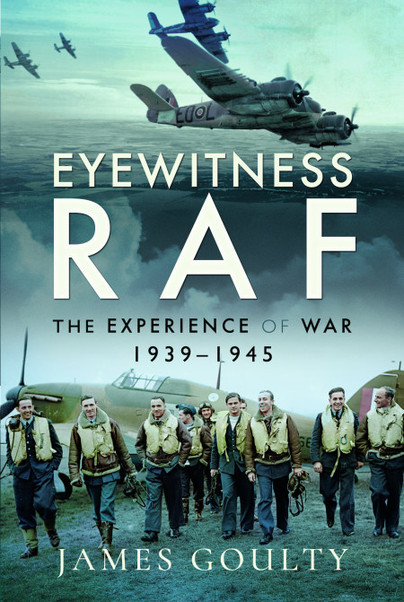 Click here for help on how to download our eBooks
Add to Basket
Add to Wishlist
You'll be £4.99 closer to your next £10.00 credit when you purchase Eyewitness RAF. What's this?
Need a currency converter? Check XE.com for live rates

Much has been written about the Royal Air Force during the Second World War – memoirs, biographies, histories of Fighter and Bomber commands, technical studies of the aircraft, accounts of individual operations and exploits – but few books have attempted to take the reader on a journey through basic training and active service as air or ground crew and eventual demobilization at the end of the war. That is the aim of James Goulty’s Eyewitness RAF. Using a vivid selection of testimony from men and women, he offers a direct insight into every aspect of wartime life in the service.

An engaging review of the RAF war experience from the views of those who served, from an author with a particular interest in training and combat. The scale and variety of experiences for air and ground crew during WWII is hard to fully appreciate today – Very Highly Recommended

Eyewitness RAF: The Experience of War, 1939–1945 is a new (2020) collection of first hand accounts that covers all aspects of service in the RAF during the war. Each Command of the RAF is considered as well as chapters devoted to training, accidents, being taken prisoner through to demobilisation. A wide range of sources have been used to produce a comprehensive picture of service through the war. Probably the best single volume overview of the RAF available, for those looking for personal accounts of the experiences of the men and women involved.

What a fantastic book to read, about the RAF during world war two, this book takes a look at recollections, accounts and stories of the men and women who served in the RAF at that time. The book covers everything really from training to working in different roles, casualties and finally being demobbed. You can tell the author James Goulty writes from a university background, not because the book is very formal but because of the way it is structured. I loved the writing enormously, very well-paced and the right balance was struck between who was written about and the amount each section was covered. But the best was the real telling of the stories and the humour emphasis of the author, a man who has and shares the good dry wit that was similar to the people he was talking about. It was nice to read about the role and voice of women, as many of these books about the forces are male-centric. The notes section was good and informative, I’ve taken a few titles down to do further reading. (lookout my local library). The glossary was also informative and handy, it is good to have a book that supports all the acronyms and abbreviations it uses. I really enjoyed this book and would recommend it to anyone interested in the RAF and its role in WW2, one of the best books I have read in a while.

Everyone's War, The Journal of the Second World War Experience Centre, No.42, 2021

While this review barely scratches the surface, the book provides a true, yet often heart-wrenching narrative, detailing a force facing seemingly insurmountable odds.