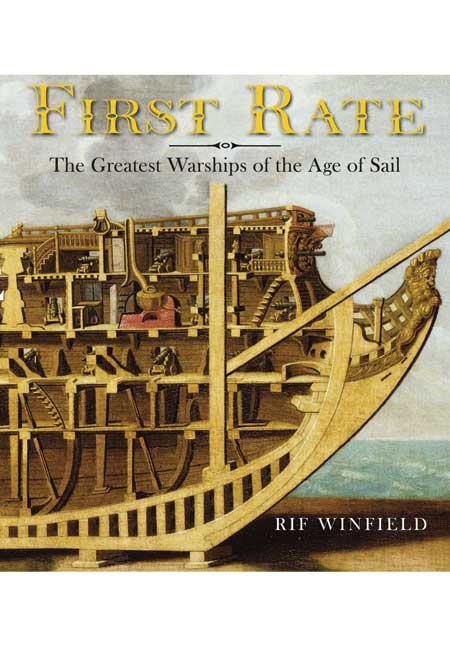 The Greatest Warships of the Age of Sail

Click here for help on how to download our eBooks
Add to Basket
Add to Wishlist
You'll be £18.00 closer to your next £10.00 credit when you purchase First Rate. What's this?
Need a currency converter? Check XE.com for live rates

In the sailing era First Rates were the largest, most powerful and most costly ships to construct, maintain and operate. Built to the highest standards, they were lavishly decorated and given carefully considered names that reflected the pride and prestige of their country. They were the very embodiment of national power, and as such drew the attention of artists, engravers and printmakers. This means that virtually every British First Rate from the Prince Royal of 1610 to the end of sail is represented by an array of paintings, drawings, models or plans.

This book is a celebration of these magnificent ships, combining an authoritative history of their development with reproductions of many of the best (and least familiar) images of the ships, chosen for their accuracy, detail and sheer visual power in an extra-large format that does full justice to the images themselves. It also includes comparative data on similar vessels in other navies, so it is a book that everyone with an interest in wooden warships will find both enlightening and a pleasure to peruse.

RIF WINFIELD is best known for his incredibly detailed three-volume series British Warships in the Age of Sail, published between 2005 and 2009, which covers every Royal Navy vessel built, purchased or captured between 1603 and 1817.

An absolutely recommendable volume to buffs of this sector.

The book covers the main eras of the age of sail, starting with the Caroline navy, through Commonwealth, Restoration and the French and Napoleonic wars, and culminates in the steam – powered wooden battleships of the Victorian era. Each chapter is illustrated with well chosen paintings, etchings, photographs, mainly of the Admiralty models of the period, and wherever possible Admiralty drafts of appropriate ships. The design and careers of individual ships are briefly described with particular highlights covered in more detail. There are also numerous two – page spreads on related topics. The reproduction of the illustrations is, without exception, superb; clearly a lot of effort here has gone into getting the colour reproduction as close to the original as possible. The piece de resistance is a superb four - page fold out of the draft of HMS Victoria of 1863; a full – colour reproduction, replete with detail. This is a book to be recommended to anyone with an interest in these ships, which arguably constituted mankind’s greatest technological achievements during the 300 years or so that they reigned supreme.

Each chapter is lavishly illustrated with well chosen paintings, etchings and photographs. The reproduction of the illustrations themselves is, without exception, superb. This book should appeal to the widest audience, from those whose interest lies in marine painting to those who build detailed ship models.

The book is oversized to accommodate the many illustrations provided to enrich the accompanying text. This book will appeal to anyone interested in the sailing navy, as the details of the shipbuilding, dockyard organisation, costs, materials, decoration, rigging and the varied histories of the great ships themselves, is fascinating. The book is wonderfully illustrated and well laid out. The research and knowledge of the author is everywhere apparent. Winfield's writing style is engaging and easy to read: an excellent book, well worth the money.

This large format, lavishly-illustrated volume is a celebration of these superb ships and combines an authoritative account of their development with an excellent array of images which bring the story to life. Recommended to all fans of wooden warships.

First Rate tracks the evolution of the Royal Navy's largest and most impressive sailing warships. Richly illustrated with paintings, drawings, photos of models and plans, this is a fascinating journey in print across the development of the First Rate capital ship. Lavish models and original drafts enliven the text. Whether a model-maker, someone aspiring to create paintings of warships in the Age of Sail, or somebody seeking a straight forward, concise account of the interplay between strategy, naval administration and technology, 'First Rate' is, to coin a phrase, first rate.

This book covers the period of 1610 to 1850, and discusses over 60 different warships in the great age of sail. It is an immensely detailed reference work, and in its 11 chapters describes some of the Navy's most impressive fighting periods. Thus there are chapters on the Pepysian Age that included the time of Anglo-Dutch Wars, the Later Stuarts though the time of the establishments to Anson's New Navy.
In this comprehensive account of the great first rate ships bristling with cannons, there is much of interest. Most chapters begin by giving an overview of the current admiralty requirements in line with projected needs for peace and war. This discusses the ships that were to be constructed, ships to be rebuilt, or taken out of service, etc... while later in this chapter a more detailed description of the individual ships are given.

It is a rare occurrence indeed to have the great pleasure of receiving quite such a magnificent large-format volume such as this, Rif Winfield's First Rate, arriving on one's desk for review.
The striking and very informative front and back dustcover illustration, section through a First Rate, 1701, also reproduced inside the book over two pages, is reproduced from an oil painting attributed to Thomas Philips in the National Maritime Museum, Greenwich.
I have said similar things before about Rif Winfield's other works published by Seaforth, but this new volume too is beautifully produced to a high quality level, and copiously, even lavishly illustrated.

I believe that every ship modeler from the beginner to the master craftsman, should strive to know as much as possible about the ship they're building and its place in history. The more you know, the more your model will taking on meaning and fewer mistakes will be made in its detail.
That it is primary value for a book like 'FIRST RATE'. Mr Winfield does a first rate job of outlining the history of the 'Queen of Battle', the 100 or more gun sailing ship of line, up to and including the first steam conversions. The book is not designed to be a final word on these magnificent ships but to serve as a primer, guide and overall descriptor. It should be of value to the model builder, the maritime historian and the the writers of maritime fiction.

Rif Winfield, a maritime historian who concentrates his studies on warships during the Age of Sail, gives readers a unique and up-close look into the largest and most powerful vessels, the First Rates, in the British Navy from the reign of James I through the emergence of steam warships in the nineteenth century. He begins with the first three-deck warship, the Prince Royal (1610), and ends with the steam-assisted vessels, the Victoria (1859) and the Howe (1860). The material is arranged chronologically into eleven chapters devoted to various aspects of the vessels and captured first-rate prizes that joined the Royal Navy.

In his introduction, Winfield explains the importance of these vessel: "...they served not only as the most imposing weapons systems of their day...but also as potent symbols of the power and prestige of the nation, not just for the monarch and the government, but also for the wider civil poplace."

Aside from the narrative and captions for the many colour and black and white illustrations that accompany each chapter, he includes tables listing the vessels, the builders, the dates in which they were ordered, built, and rebuilt, tonnage and measurements for the keel, breadth and depth. He also discusses the builders, their designs, and the battles in which the First Rates participated over the years. Throughout the book Winfield deftly shows the evolution of and the innovations incorporated into these ships. An index of the ships found in this volume is also provided.

Several times during the narrative, he spotlights particuLar aspects of the First Rates over a two-page spread. These include: The First Rates in the Anglo-Dutch wars, The Navy Board Model, The Royal William of 1719, The Changing Shape of the Bow, The Changing Shape of the Stern and Fittings. Also of note is the inclusion of what the vessel looked like below the top deck, information that is often lacking in many books on ships. This section boasts a cross-sectional from 1701, as well as the deck plan for the Royal George (1756).

The beautiful paintings, drawings, and detailed models that accompany the text enrich this book. Better than descriptive words these illustrations bring to life these magnificent ships. Contemporary art depicts the vessels at sail and during battle, giving readers a better appreciation for these warships. The illustrations also include original draughts (drafts) of some of the vessels, which provide readers with glimpses into the design work of the shipwrights. One reproduction is a "detailed draught of the Victoria" that unfolds in length to the equivalent of four pages/.

First Rate is a treasure beyond equal measure for anyone interested in these powerful and magnificent warships from the Age of Sail.