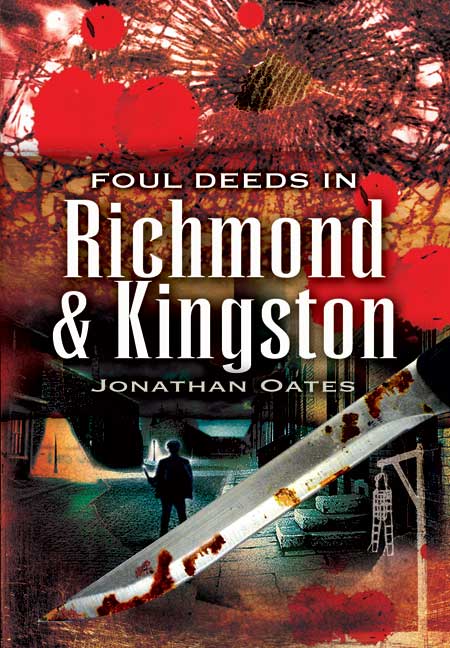 Click here for help on how to download our eBooks
Add to Basket
Add to Wishlist
You'll be £4.99 closer to your next £10.00 credit when you purchase Foul Deeds in Richmond and Kingston. What's this?
Need a currency converter? Check XE.com for live rates

You may think Richmond, Kingston and the neighbouring districts are prosperous, safe and law-abiding in comparison to the hazardous, crime-prone centre of London, but you would be mistaken. For, as Jonathan Oates shows in this gripping book, appalling crimes have shocked the local community and left their mark on the history of the area over the last two centuries. Among the sensational criminal cases he reconstructs in chilling, forensic detail are the murder of the French count and countess who fled the reign of terror in revolutionary France only to become the victims of their own servant, the bigamist suspected of poisoning, the female servant who was hanged for chopping up her mistress, the poverty-stricken elderly couple who swallowed belladonna in a suicide pact, the jobless accountant who shot his three children and committed suicide, and the killing of two teenage girls who were assaulted, then stabbed, then thrown in the Thames. As he takes the reader through these stories of malice, perversion and despair, Jonathan Oates reveals the dark, sometimes lethal side of the history of Richmond and Kingston.

The dark underbelly of life in Richmond has been explored in a new book blowing apart the myths of life in leafy outer London.

Foul Deeds: Richmond and Kingston has been written by Dr. Jonathan Oates, Ealing borough archivist and local history librarian. He has uncovered disturbing crimes through the past two centuries that shocked the communities and left their mark on local history. As Dr Oates writes: "When Richmond's history is mentioned most people think of Hampton Court and Henry VIII.

"Crime does not obviously spring to mind, whereas it would if Whitechapel or Notting Hill were mentioned.

"Some books about Richmond and Kingston do not even allude to it. Yet criminal activity does not recognise geographical or social boundaries and this book aims to demonstrate this."

Among the sensational cases are the story of a French count and countess who fled the terror of revolutionary France, only to become the murder victims of their own servant.

Many French exiles moved to Twickenham, Richmond and Barnes, to escape the persecution. One such person was Comte D'Antraigues or to give him his full name, Emmanuel Louis Henri Alexandre de Launay. He was a relation of French royalty, and married Madame St Huberti.
From about 1807 or 1808 they were living in a house on the upper part of Barnes Terrace, "a line of food houses", half-a-mile from the parish church and near the Thames.

Dr Oates writes: "They kept a coach, a coachman (William Henditch), footman and a servant out of livery. The latter was also termed a valet. In July 1812, this post was held by an Italian, named Lawrence Stelli, who had been with them for three months. The family also had a town house in Queen Anne Street, in London's West End.

"One morning, Wednesday July 22 1812, the coach had been ordered for eight o' clock, for the Comte and Comtesse desired to go to London.
"It arrived at just before 9 and the two were ready to depart, the Comte descending the stairs and his wife was just crossing the threshold of their house.
"It was then that the report of a pistol was heard in the passage. This seems to have had no effect.
"Then the firer, who was none other than Stelli, threw his gun away, and rushed up the stairs, passing his master as he did so. He immediately returned, knife in hand, and plunged it up to the hilt in the Comte's shoulder.
"Ironically, the Comte had bought this knife decades earlier, in Constantinople, and kept it in his bedroom for self defence. Quickly pulling his deadly weapon out of his victim, he continued through the house.
"Finding his mistress on the doorstep, he attacked her, stabbing her in the left breast. No sooner than he had done so, than the injured Comte appeared before him and evidently stood just outside the house."

Fascinating insights such as the fact Stelli had a gin in the White Hart pub before committing the murder, and then killed himself, can all be found in the well-researched book. While the internet proved a limited resource, the National Archives, Kew, and this paper's sister paper, the Surrey Comet, provided a far more comprehensive record of what happened.

This book takes crime historians through stories of malice, perversion and despair in chilling, forensic detail.

Dr Oates has written and lectured on aspects of the history of London, including its criminal past. His books include Foul Deeds and Suspicious Deaths in Lewisham and Deptford and Unsolved Murders in Victorian and Edwardian London.

He is also an authority on the Jacobite rebellions of 1714 and 1745 and recently published Sweet William or The Butcher? The Duke of Cumberland and the '45.