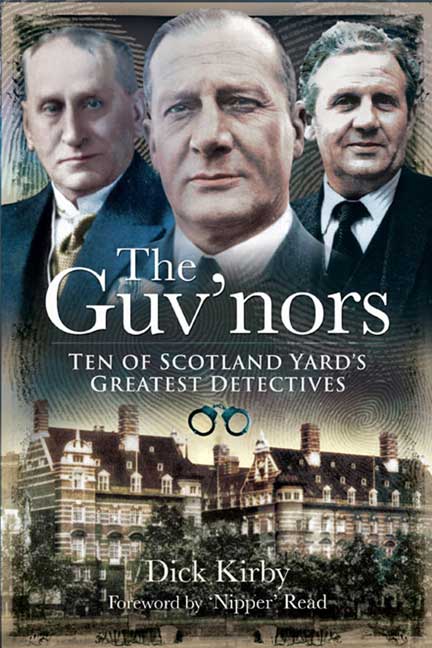 Click here for help on how to download our eBooks
Add to Basket
Add to Wishlist
You'll be £4.99 closer to your next £10.00 credit when you purchase The Guv'nors. What's this?
Need a currency converter? Check XE.com for live rates

The ten Scotland Yard detectives, featured in The Guv’nors, are unique. Such a group of intrepid crime-busters will never exist again. They possessed only the most rudimentary education; none had a degree. Intuition and knowledge of their ‘manor’ counted for more than DNA and databases.

They worked tirelessly in the pursuit of criminals, used informants, worked on hunches and grabbed hold of investigations and shook them until every piece of evidence was unearthed. Criminals trembled when these detectives were after them because, once they were nicked, they stayed nicked.rnrnThe Guv’nors covers legends such as Fred Wensley, who nailed strips of bicycle tyres to the soles of his boots when on the look-out for Jack the Ripper. He later formed the Flying Squad and became chief constable of the CID. Fred Sharpe would single-handedly confront forty of the worst racetrack gangsters and tell them to ‘clear off’, anyone who refused would collect a punch on the jaw. Sharpe later became head of the Flying Squad, as did Bob Fabian, who was awarded the King’s Police Medal for dismantling an IRA bomb.rnrnBert Wickstead, known as ‘The Gangbuster’, literally terrorised the gangs who attempted to fill the void in London’s East End, after the demise of the Kray bothers.rnrnThis is a book which will delight those who want to know what life was like when The Guv’nors and others like them were in charge of law and order and the streets were far safer than they are today.rnrnDick Kirby was born in the East End of London and joined the Metropolitan Police in 1967. Half of his twenty-six years’ service was spent with Scotland Yard’s Serious Crime Squad and the Flying Squad.

The author of Rough Justice, The Real Sweeney, You’re Nicked! and Villains, Kirby also contributes to newspapers and magazines on a regular basis, as well as appearing on television and radio.rnrnIn retirement, he lives near Bury St Edmunds, Suffolk.

Remembering the heroes of the Yard.
Detectives didn’t always have lots of cutting-edge technology at their beck and call, but they still got the job done. A new book honours top policemen from the past.

Written by an experienced ex-copper, Dick Kirby provides unearthed informations about ten of the most respected Guv'nors. These detectives were from back in the day when pursuits could happen based on their hunches or intuitions. Unlike today, a detective was more respected and renowned for their knowledge and reputation around the time of these famous men. To become a Guv'nor was the highest rank a detective could achieve, but was only gained through respect because it had to be earned - it was not a right. Not any detective could become a Guv'nor, only the best of the best - and even then they had to rely more on experience and reputation than knowledge and qualifications. In the days before DNA and databases, police work included a bit of 'roughing up' the suspected criminal to get them to confess as well as tirelessly searching through old paper records - nothing could be done at the click of finger like it can today! The ten men in this book are each equally worthy of their titles as Guv'nors as well as being the most famous. Dealing with the most notorious of killers and other criminals, these detectives worked fearlessly hard to track them down and bring them to justice - physically as well as lawfully. The accounts of crime-solving told in this book are the last of their kind due to political correctness and the technology we have these days. The men in this book were so powerful that they were even feared by the toughest of villains and made criminals scared to commit a crime in the first place. Conclusions can be drawn as to whether or not the streets are safer now than they once were due to the policing methods. Whichever conclusion is drawn, the old way of policing will never return so this book commemorates those who did a great job and are still respected a century on.

The Guv'nors cover ten legends in Scotland Yard who even the criminals feared, ten legends such as Fred Wensley who was a patrolman during the Jack the Ripper murders and later formed the Flying Squad. Another legend such as Fred Sharpe who through brute force and courage brought down forty racetrack gangsters. This book gives gripping accounts of crime solving before the time of political correctness and technological achievements, when coppers had to act on their gut instinct and at times obsessive determination to solve the crimes.

With a foreword by Leonard 'Nipper' Read, the detective who brought down the Kray Twins, former detective and author Dick Kirby has delved into a gripping field of interest he knows much about. Been born in the East-end of London, Kirby brings his twenty six year's experience in the police force to this book and the many other true crime books and articles in newspapers that he has written over the years.

Detectives didn't always have lots of cutting-edge technology at their beck and call, but they still got the job done. A new book honors top police men from the past.

Former Met Flying Squad officer Dick Kirby has identified ten of the greatest Scotland Yard detectives that- he believes - have made the most impact in past decades.

His book The Guv'nors is his tribute to the men.

The fantastic reputation that is enjoyed by Scotland yard internationally was forged by the hard work, dedication and incredible successes of the Criminal Investigation Department and by the devotion and commitment of its officers.

Now a new book by veteran investigator and prolific author Dick Kirby has captured those tales in his new book.

The accounts given by Dick Kirby about the fascinating detectives really gives the reader an insight into how these detectives used to handle criminals in the past. This interesting book makes you question how today's policemen handle criminals and whether the ways of the detectives mentioned in the book are more effective for stopping crime and whether that is what is missing in today's society to fight back against criminals. Those who like detective books will enjoy this interesting read due to the fact that it not only gives you an insight into what the detectives themselves were like but also cases that thy have covered and the criminals they have beat, sometimes literally. By using first person narrative in the book also makes the reader feel like they re more involved in the stories about the detectives in the book which adds an extra layer of depth onto this intriguing book. I personally enjoyed this book due to the fact that I found the men mentioned in the book very fascinating, mainly because of the fact of how they handled their cases and how the got the information that they required out of the 'bad guys'; even how they had very few limitations on what they would do to anyone who had information and was stopping them from getting their man/men.

Experienced, knowledgeable, and instinctive are those who are awarded accreditation within the pages of this book, for what they unearth is the result of tireless pursuits of hunches, informants, facts and evidence in their bid to make the streets safe and oversee the demise of the criminal perpetrator and their crimes. The book covers ten notably successful legends in their field, including Fred Wensley who hunted Jack the Ripper; Fred Sharpe who confronted forty of the worst racetrack gangsters; as well as Bob Fabian who was awarded the King's Police Medalfor dismantling an IRA bomb. All these determined and highly respected crime-busters are captivatingly described in the utmost detail by ex-copper author, Kirkby, who effortlessly describes times before the aids of technology, or the existence of 'political correctness'. A fabulous read for anyone interested in true crime.

The Guv'nors is a gripping account following the lives of Scotland Yard's 10 best crime busting detectives. Author Dick Kirby, a former Flying Squad police man, who lives in Great Whelnetham said it was an enjoyable experience writing about such incredible characters. The book features Fred Wensley, whom Mr Kirby described as 'the greatest detective of all time' who was drafted in to patrol the streets during the 'Jack the Ripper' murders. Attaching bicycle tyres to his shoes to silence his step, Wensley hoped to catch the Ripper in the act.

Another, Fred Sharpe, more commonly known as 'Nutty', often confronted and dealt with forty strong racetrack pickpocket gangs on his own and was widely respected. Mr. Kirby said he admired these legendary detectives who had elementary education and none of whom had degrees but who knew the best ways to interview the criminals and how to ensure they were put away.