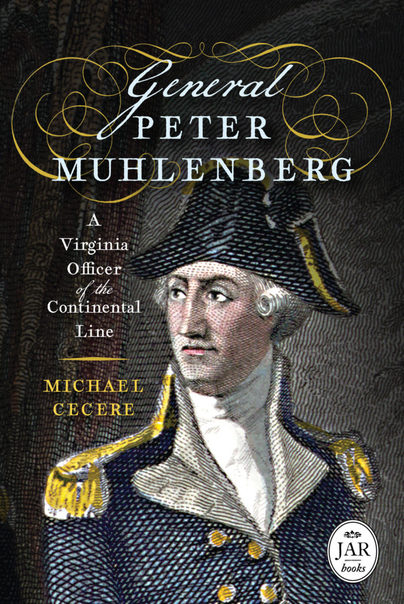 A Virginia Officer of the Continental Line

Add to Basket
Add to Wishlist
You'll be £16.99 closer to your next £10.00 credit when you purchase General Peter Muhlenberg. What's this?
+£4.50 UK Delivery or free UK delivery if order is over £35
(click here for international delivery rates)

Standing at the pulpit in his church in the Shenandoah Valley, the preacher borrowed from Ecclesiastes, declaring in a firm voice that “To every thing there is a season . . . .” He then announced, “that there is a time to fight, and that time had now come,” and abruptly removed his clerical robe to reveal his colonel’s uniform. There is little doubt that this clergyman-turned-soldier uttered words to this effect, but whether he threw off his robe to reveal a gleaming uniform may be embellishment. In General Peter Muhlenberg: A Virginia Officer of the Continental Line, historian Michael Cecere cuts away the romanticism surrounding this fascinating character to present him as a highly capable and dedicated officer who served for seven long years in America’s War for Independence; a man of faith who held the high ideals of that office in his conduct with fellow officers and regular soldiers alike.

First appointed to lead the 8th Virginia Regiment of the Continental Army, Muhlenberg and his troops served under General Charles Lee in the defense of Charleston in 1776. Sent north and promoted to brigadier-general, Muhlenberg participated in the ensuing battles of Brandywine, Germantown, the winter at Valley Forge, and the major clash at Monmouth Courthouse. In 1780, he returned to Virginia and stood at the forefront of Virginia’s defense when the British invaded in 1781. At Yorktown, Muhlenberg commanded the continental light infantry troops that stormed Redoubt No. 10, sealing Cornwallis’s fate. Focusing on the military career of Muhlenberg, the author follows Muhlenberg and his troops as they battled some of the most storied adversaries of the war, including John Graves Simcoe’s Queen’s Rangers, Captain Johann Ewald’s German Jaegers, and Banastre Tarleton’s British Legion.

Admired by George Washington and his fellow officers and men, Muhlenberg was an American patriot who sacrificed much for his country’s cause, and truly “lived respected and died regretted by all good men.”

MICHAEL CECERE received a BA at the University of Maine, Farmington, and an MA in history and an MA in political science from the University of Akron. He currently teaches history at Robert E. Lee High School, Fairfax County, Virginia, and at Northern Virginia Community College in Woodbridge. He was recognized by the Virginia Society of the Sons of the American Revolution as their 2005 Outstanding Teacher of the Year. He is the author of a number of books, including A Universal Appearance of War: The Revolutionary War in Virginia, 1775–1781.