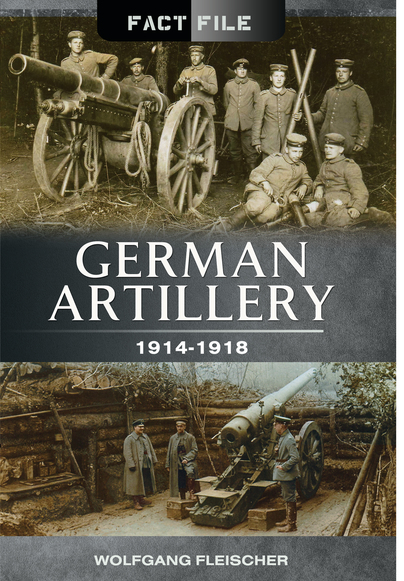 Add to Basket
You'll be £9.09 closer to your next £10.00 credit when you purchase German Artillery. What's this?
+£4.50 UK Delivery or free UK delivery if order is over £30
(click here for international delivery rates)

The importance of artillery in warfare grew more and more throughout the nineteenth and early-twentieth centuries. New developments such as solid cannon barrels improved hit accuracy and the range of projectiles. This Fact File volume focuses on German Artillery during the Great War, when it could be argued that artillery was for the first time the dominant weapon on the battlefield. Wolfgang Fleischer discusses the diversity of artillery developed and used during the First World War by the Germans.

Having just read a similar book on Second World War artillery, many of these pieces look remarkably primitive in comparison (especially some of the gun mounts), but that shouldn't detract from their effectiveness - these were the weapons that created the devastating artillery bombardments recorded in so many British memoirs of the First World War. This is a useful guide to those German guns.

The author discusses artillery developed and used by the German forces. Each weapon is presented with a short description, images and a reference table of key technical data, supplemented by some colour illustrations. A most useful and accessible reference work is the result.

In a 127 page pocket guide the author does an excellent job of providing details of over 100 different guns, although in a book of this size it is impossible to cover every single weapon that was used, but it does cover a very broad spectrum, and picks out some particularly interesting weapons. It breaks them down into six main headings of; Field Artillery: Fussartillerie and Heavy Flat Trajectory guns: Anti-Aircraft guns: Infantry, Anti-Tank and Mountain guns: Fortress Guns: and finally, Coastal Artillery. The variety of guns included under each heading is extensive and interesting. Each one has the name, plus a photo and or drawing of the weapon, along with some background notes and an individual data table showing Calibre, Barrel Length, Weight for Transport, Weight in the Firing Position, Weight of Shell, Traverse, Elevation/Depression angles, Muzzle Velocity, Rate of Fire and Maximum range. Then within the Glossary at the back of the book, among other things, a nice neat and simple diagram that shows the trajectory of fire comparing Field Howitzer, Howitzer and Morser, among some other interesting notes.

With lots of content, this is a handy guide for Germany's artillery equipment used in WW1, and for the money, a very good reference to have on your bookshelf.