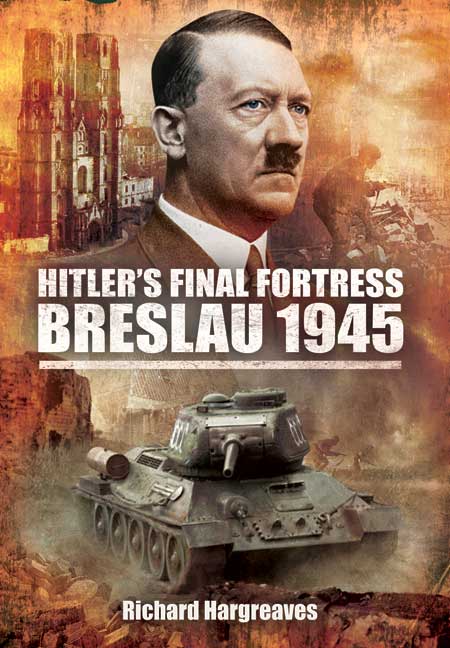 Click here for help on how to download our eBooks
Add to Basket
Add to Wishlist
You'll be £4.99 closer to your next £10.00 credit when you purchase Hitler's Final Fortress. What's this?
Need a currency converter? Check XE.com for live rates

In January 1945, the Red Army unleashed its long-awaited thrust into Germany with terrible fury. One by one the provinces and great cities of the German East were captured by the Soviet troops. Breslau, capital of Silesia, a city of 600,000 people stood firm and was declared a fortress by Hitler.

A bitter struggle raged as the Red Army encircled Breslau, then tried to pummel it into submission while the city's Nazi leadership used brutal methods to keep the scratch German troops fighting and maintain order. Aided by supplies flown in nightly and building improvised weapons from torpedoes mounted on trolleys to an armoured train, the men of Fortress Breslau held out against superior Soviet forces for three months. The price was fearful. By the time Breslau surrendered on May 6, 1945, four days after Berlin had fallen, 25,000 soldiers and civilians were dead, the city a wasteland. Breslau was pillaged, its women raped and every German inhabitant driven out of the city which became Wroclaw in post-war Poland. Based on official documents, newspapers, letters, diaries and personal testimonies, this is the bitter story of Hitler's Final Fortress.

The author conveys the events during the Siege of Breslau very well. For those who are interested in the history of this lesser known aspect of the Second World War, this publication is certainly a recommendation.

A powerful, haunting indictment of a lunatic time and place where two fanatical military-political meat grinders chewed up a city and its people as they tore each other to pieces in the closing stages of the 20th Century's most terrible war.

This is a very interesting story of the last holdouts of the crumbling Third Reich. This book belongs in the library of all WWII scholars and enthusiasts.

In 1945 Breslau held out for longer than any other German city. The siege began on 13 February when the Soviets first encircled the city the city finally surrendered on 6 May, four days after the fall of Berlin. Hargreaves does an excellent job of putting the siege in its wider context.

The siege itself is covered in great detail, with eyewitness accounts from the civilian inhabitants, the German defenders (from experienced troops to newly recruited novices) and the Red Army attackers. Both sides suffered during the fighting, but life within 'Fortress Breslau' was particularly terrible, and the first-hand accounts of civilian life and the experiences of the city's defenders make this very clear. Their situation was made worse by a realisation their suffering was almost certainly in vain with only a few of the more dedicated Nazis believing that the war could still be won.

This is a superb study of a bitter siege, giving a very clear image of the dreadful nature of the war on the Eastern Front and the cost suffered by the civilian population as the war flowed around them.

Mr Hargreave's latest book, tells how the Nazi leadership in the city used brutal methods to force the scratch German army to keep fighting, although they must have known the game was up and how they retained order among the dwindling population.
The author describes the chaos following surrender of "Hitler's fortress" as Tartars and Kalmuks broke into remaining homes to steal food and then hid in their booty in the cemetery vaults - after slinging out the cadavers.