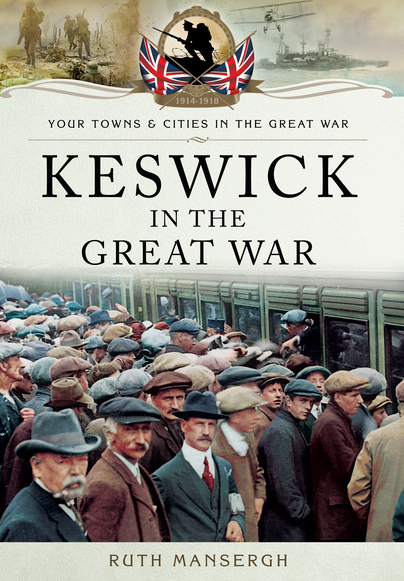 Keswick in the Great War (ePub)

Click here for help on how to download our eBooks
Add to Basket
Add to Wishlist
You'll be £4.99 closer to your next £10.00 credit when you purchase Keswick in the Great War. What's this?
Need a currency converter? Check XE.com for live rates

Keswick in the Great War is an expert account of this Lake District market town's fascinating, yet largely forgotten, contribution to the Great War effort from the outbreak of war in 1914, to the long-awaited Allied victory in 1918.

It charts the remarkable, and sometimes moving, stories of several heroic local figures, including Lord and Lady Rochdale, who converted their home into a VAD hospital; Caleb Barnes, a former headteacher of Braithwaite Primary School who was taken prisoner in Belgium; Catherine Elizabeth Marshall, supporter of The No-Conscription Fellowship, whose husband, the chairman of the NCF, was imprisoned in 1916; and Reverend Bettison, Curate of Crosthwaite, who was mobilised on 4 August 1914 and sent to Burma in October 1914.

The book also acts as an accessible reference guide to local war memorials, such as The Fretwork War Shrine, as integrated throughout are rare wartime illustrations of these memorials and rolls of honour, like the recently discovered roll of honour found inside Underskiddaw Church Rooms.

Overall, this is a poignant testimony to the momentous efforts, bravery, self-sacrifice and determination of the people of Keswick during the Great War, who sought to find normality in a reality so far removed from anything they had ever known.

'Keswick in the Great War is an expert account of the town's fascinating yet largely forgotten contribution to the Great War effort from the outbreak of war in 1914 to the Allied victory in 1918.'