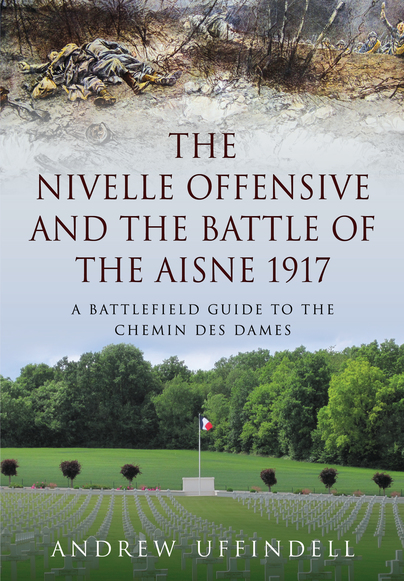 The Nivelle Offensive and the Battle of the Aisne 1917 (ePub)

A Battlefield Guide to the Chemin des Dames

You'll be £4.99 closer to your next £10.00 credit when you purchase The Nivelle Offensive and the Battle of the Aisne 1917. What's this?
Need a currency converter? Check XE.com for live rates

The notorious plateau of the Chemin des Dames saw some of the heaviest fighting of the First World War. Situated just 100 km north-east of Paris, it was the scene in 1917 of the bitterly-controversial Nivelle offensive, which is remembered today as one of the worst disasters in military history.
For battlefield tourists, the Chemin des Dames is among the most fascinating sites on the entire Western Front, yet until now there has never been a detailed English guide to the actions that raged there in 1917. This new book by Andrew Uffindell fills that gap: as well as demolishing the many myths about the Nivelle offensive, it enables readers to explore the remarkable battlefield for themselves.
Five tours supplemented by forty-six stops at individual places of interest provide an exceptional insight into the struggle for the Chemin des Dames. Illustrated with a wealth of maps and photographs, this book will be essential reading for anyone interested in the First World War.

The ridge of the Chemin des Dames some 70 miles north east of Paris saw some of the bloodiest actions of the Great War.
Three major battles – the battles of the Aisne – were fought there. British units were heavily engaged in the first and third battles in 1914 and 1918, while the French failure to break through the German positions in 1917 helped precipitate a crisis of morale. This well illustrated, pocket sized, new guide to the area explains the strategic background and provides a series of tours that explore specific areas of the Chemin des Dames. By using this guide readers are able to explore the battlefield, along with its many monuments, cemeteries and other relics.

This battlefield guide to the Chemin Des Dames battlefield provides an excellent resource to anyone visiting the area and offers a series of tours that explore specific areas in vivid detail. Visitors using this guide will gain a deeper understanding as well as a sense of how the terrain shaped the fighting.

Andrew Uffindell has written a number of books on the Great War and Napoleonic history, including a really good guidebook to the Marne 1914 battlefields which I used on the ground a while back. This new title The Nivelle Offensive & The Battle of the Aisne 1917 is an in-depth battlefield guide to the battlefields where the Neville Offensive took place on the Chemin des Dames in 1917, and where the French Army mutinied. The book breaks the battlefield up into sectors from Laffaux in the west to Malmaison and Craonne. The maps and illustrations are excellent, and there is a good mix of history and battlefield information. The section on the first use of tanks by the French is especially interesting. Another great battlefield guide to a neglected aspect of the First World War.

I have been a regular visitor to the battlefields of the Aisne valley and the Chemin des Dames ridge over many years and can honestly say that I have learned more from this book than all my visits and many other books combined. It is a terrific and well-written piece of work that I can heartily recommend to anyone with an interest in this sector of the Western Front...

... The Nivelle offensive and the Battle of the Aisne 1917 is presented in a way that will be familiar to readers of Pen & Sword’s “Battleground Europe” series in that it is part-history, part-guidebook and well illustrated with maps and photographs...

... Excellent. If you ever plan to see the Aisne in person or even through the internet from your armchair, or if you wish to know more about the French Army and their little-covered endeavours, do not hesitate to buy “The Nivelle offensive and the Battle of the Aisne 1917”.

This is another one of the excellent Battlefield Guides which are published by Pen and Sword, this time covering a WW1 battlefield that holds an important place in the story of the French Army in particular during WW1. It is an excellent mix of giving the historical context of what went on in this region. Located about 100Km away from Paris, to the North East of the city, it was a stopping point for the initial German assault at the start of the war, and the line of the road, the Chemin des Dames, which became part of the front line essentially for the rest of the war. It was in 1917, with a huge French offensive that failed to make significant advances yet at great loss of life that brought about mutiny among French soldiers, not because of the war or defending their homeland, but for the huge loss of life over a quite insignificant area of ground.

As well as giving the history, it is all mixed in with some suggested tours you can take of the battlefield. Some of it can be done by car, but a number of them need to be done on foot. With each route there are details of what happened at various points, as well as what remains there to be seen to this day. There are old forts, villages destroyed but never rebuilt, underground caves that were used for shelters, areas where tank attacks took place, bunkers, the remains of trench lines and many memorials erected around the battlefield. In some, there is one farm in particular, which was rebuilt and has two memorials on the walls now, one from the first battle and then another for WW2 when de Gaulle's armoured division fought there in 1940.

Each tour is well detailed, and you are given the extra guidance of which maps would be useful to have with you and throughout the book it is well illustrated by photos from the period as well as many modern day comparisons. It really is just the sort of guide to keep in your car with you and take a trip over the Channel to see these battlefields. The widespread devastation has of course now been reclaimed by nature. Written by a historian who knows the area well thanks to his own studies, that knowledge is shared with the rest of us in this handy new battlefield guide. Ideal to pop in your car and take with you if you hop over the channel and visit the battlefields today.