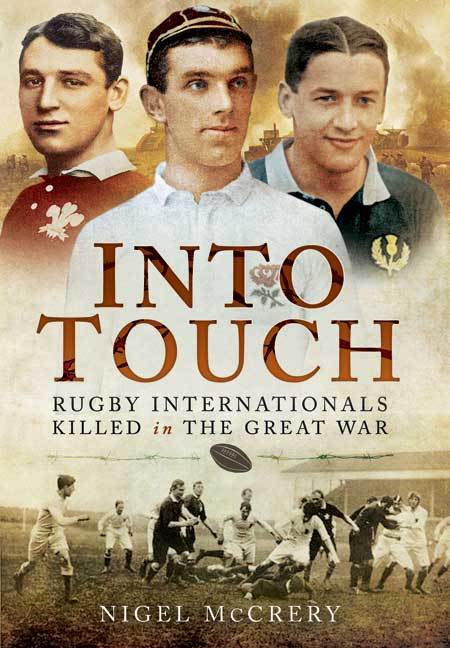 Click here for help on how to download our eBooks
Add to Basket
Add to Wishlist
You'll be £4.99 closer to your next £10.00 credit when you purchase Into Touch. What's this?
Need a currency converter? Check XE.com for live rates

Many thousands of men died during the Great War. They came from every place and class. The very cream of the Nation joined up thinking it a great adventure but, all too often, never returned. This book is dedicated to the memory of an elite few of such men – the Rugby Internationals who fell in The Great War. Among the hundreds of thousands who served and died for their country were one hundred and thirty Rugby Internationals.

To place the loss of these men in perspective, it is important to appreciate that Rugby Union was, arguably, bigger in its day than soccer is today. It attracted men from every walk of life. Many became national icons just as David Beckham and Wayne Rooney are now. These were men whose names were common currency in almost every household in Britain; men who were widely admired and emulated.

Yet their physical strength, fitness, prowess and courage made these heroes no less vulnerable to enemy bullets, shells and mines than their less celebrated comrades-in-arms. One hundred years on, the Author decided that any player who perished, whether he had won a single cap for his country or a hundred, would be included within this book.

Into Touch encapsulated the magnitude of a generation's sacrifice. Thanks to the Author's research into these players' service for their country, both on the playing field and battlefield, it will fascinate all with an interest in The Great War and, most particularly, those with a love for The Glorious Game and its history.

As seen in Rugby World Magazine.
As featured in the Cardiff Times and Derby Telegraph.

'Thanks to the author's research into these players' service for their country, both on the playing field and battlefield, it will fascinate all with an interest in the Great War and, most particularly, those with a love for The Glorious Game.'

'Into Touch encapsulated the magnitude of a generation's sacrifice.'

Telling the touching and inspiring stories of every rugby international from the Allied nations who died during World War One, this well researched book is a great tribute to their bravery.
Author Nigel McCrery is giving the royalties to Help for Heroes, making it an even more worthwhile purchase.
****

Whether you're a rugby fan or not, this is an absorbing book.

I enjoyed reading this book, even more so as the nature if it is that you can pick it up, read a couple of biographies and then put it down for later. I found it easy to read and informative, so recommend it to anyone having an interest in the history of the rugby union, the First World War or military history in general.

A book for fans of both the Great War and the great game of rugby. It details international players from Australia, New Zealand, France, South Africa, the US and the Home Counties killed during WWI. It outlines their biographies, their playing career and the manner of their death. Some are well known, such as England captain Ronnie Poulton-Palmer (sniped near Ploegsteert, Ypres), others not so, but they are all listed here and their stories are told. A fantastic publication I couldn't put down. It stirred my interest so much I now actively look for their graves on my many visits to the Western Front.

Into touch is a compendium of biographies of more than 130 international players of rugby football who lost their lives in military service in 1914-1918. They come from Scotland (31 of them), England (28), France (21), Wales (14), New Zealand and Ireland (12 each), Australia (9), South Africa (5) and elsewhere. The earliest to die was a French soldier who was killed in September 1914, the last died after the Armistice in 1918. The majority of the players were commissioned officers but this varies considerably and possibly significantly by nation – only 2 of the Scots and 5 of the English were not officers, whereas every man of the New Zealanders was in the “other ranks”.

I was impressed by the fact that a photograph has been found of every man.

This is a niche book.  It lists all international rugby players who were killed in The Great War; anyone who held a national cap and was killed or died from illness or disease is listed.  The list includes the 4 Home Nations, plus France, South Africa, New Zealand, Australia and USA plus a couple who were capped for a British Isles side.

Each name has a brief explanation of his playing career and some information, where known of his military service.  The ranks range from Private soldier through to Lieutenant Colonel, with corresponding national and naval ranks.  There is one VC holder, Lt Cdr Arthur Harrison  VC who was killed earning his VC at Zeebrugge – he had 2 international Caps for England.

When I got the book I thought it was a ‘strange one’ but on going through it I found it quite poignant and helps to bring home the casualty rates during World War One; from this one relatively small group of men comes such a large casualty list.

This offers a poignant snapshot of a lost generation...Each story is of a sporting hero cut down in their prime in the First World War. We are left with heart warming and heart breaking stories of men gone, but like countless others, not forgotten.