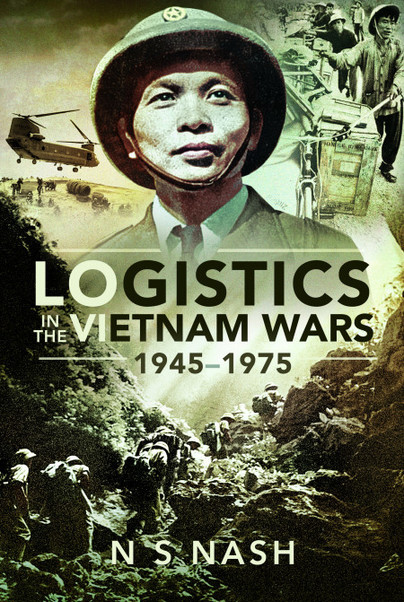 The combatants in the three Vietnam wars from 1945 to 1975 employed widely contrasting supply methods. This fascinating book reveals that basic traditional techniques proved superior to expensive state of the art systems.

During the Indochina or ‘French’ war, France’s initial use of wheeled transport and finally air supply proved vulnerable given the terrain, climate and communist adaptability . The colonial power gave up the unequal struggle after the catastrophic defeat at Dien Bien Phu.

To stem the advance of Communism throughout the region, the Americans stepped in to support the pro-Western South Vietnam regime and threw vast quantities of manpower and money at the problem. The cost became increasingly unpopular at home. General Giap’s and Ho Chi Minh’s ruthless use of coolies most famously on the Ho Chi Minh Trail proved resistant to carpet-bombing and Agent Orange defoliation.

The outcome of the final war between the Communist North Vietnam and the corrupt Southern leadership, now with minimal US support, was almost a forgone conclusion.

The Author is superbly qualified to examine these three wars from the logistic perspective. His conclusions make for compelling reading and will be instructive to acting practitioners and enquiring minds.

Logistics in the Vietnam Wars 1945-1975 is an excellent survey of the wars in Vietnam and viewed from an unusual angle.

The author has provided the best analysis of logistics through the Vietnam Wars to be published. The battle for independence from French rule began as the Japanese were being driven out of Indo China. Logistics were one of the critical keys to eventual victory. – Very Highly Recommended