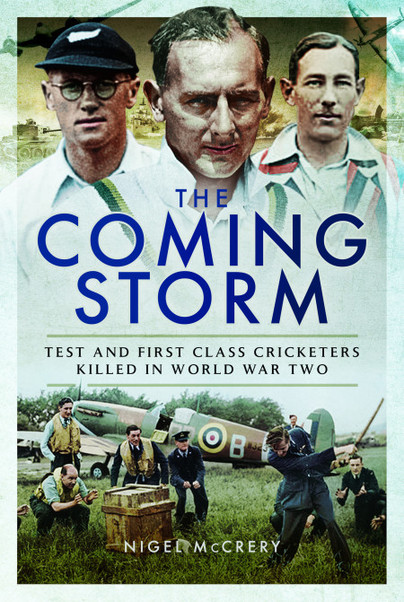 You'll be £4.99 closer to your next £10.00 credit when you purchase The Coming Storm. What's this?
Need a currency converter? Check XE.com for live rates

The outbreak of the Second World War came towards the closing stages of the 1939 cricket season. ‘Hitler permitted us almost to complete an exceptionally interesting season,’ Sir Home Gordon, wrote in the Cricketer magazine, ‘When shall we see the stumps pitched again?’

As the West Indies touring team cancelled their last five matches and sailed home before the U-boat threat developed, the treasures at Lord’s, including the Ashes, were sent to a secret location for safe-keeping. The Marylebone Cricket Club cancelled its tour to India - England played under the MCC banner then.

During the ensuing conflict twelve test cricketers (five English, two South Africans, one Australian and one New Zealander) perished together with 140 first class players. In this superbly researched sequel to Final Wicket, covering cricketing fatalities during The Great War, this book reveals each man’s career details, including cricketing statistics, and the circumstances of death. There is also a brief history of the game during the War.
Arguably the period between the two world wars was the golden age of cricket, and this book honours those who made it so only to die serving their countries in a different way.

Article: 'Finest cricketers who made the ultimate sacrifice' by Andy Smart part of the Bygones feature

Hard on the heels of the authors acclaimed Into Touch, and Final Wicket, comes The Coming Storm. Once again a wealth of detail and yes one more book to look forward to, The Final Scrum due later this year.

Article Talented cricketer Denys Witherington died in Second World War action in 1944... now he's one of more than 140 sportsmen who were lost during the conflict to be featured in a new book as featured in

The first thing to say about The Coming Storm is that it is an epic and outstanding work of research. Nigel McCrery, who has previously written books on Olympians, cricketers and rugby internationals who were killed in the First World War, has turned his attention to the 20th century's second great conflict and delivered an appropriately weighty, authoritative looking volume.

★★★★ McCrery has done an impressive job, writing 152 biographies, which are all thoroughly researched...

It seems only fitting that the gentlemen's game and how it was affected by the outbreak of the Second world War should get its own special treatment by way of this superb book by Nigel McCrery. The war was an inconvenience to the cricketing fixture lists, of course, but Nigel's book reminds us that there were many cricketers, some of them notable, who saw service and died. The game inevitable recovered in the postwar years but this is a colourful and fascinating account of the impact of the war on the national game.

A fantastic book, read it and refer back to it, for all cricket anoraks.

Pen & Sword have put together a most beautifully bound and impressive book to complement Nigel's research. Each person's biography includes rank, date of death, teams represented, cricket style and with whom the cricketer served during the war. In most cases, the biography is thorough and a lot will be learnt about these people whose lives were so sadly ended prematurely.