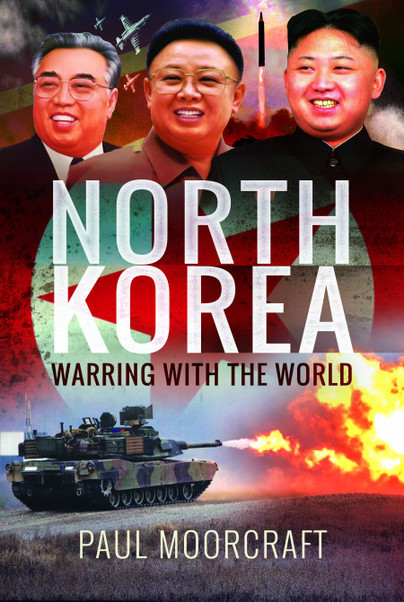 Click here for help on how to download our eBooks
Add to Basket
Add to Wishlist
You'll be £8.99 closer to your next £10.00 credit when you purchase North Korea – Warring with the World. What's this?
Need a currency converter? Check XE.com for live rates

Created in 1945 when Korea was partitioned, North Korea or the Democratic People’s Republic of Korea remains the world’s most secretive nation. Even the few permitted visitors are tightly monitored by minders, so accounts of those who have escaped are the main source of information on conditions within the country.

What is not in doubt is the totalitarian control over the population exercised by the ruling dynasty. Kim Jong-un is the grandson of the first dictator Kim Il-sung.

Until the development of a credible nuclear arsenal, it was possible to ignore North Korean posturing. But that is no longer an option as test firing proved that not only were other Asian nations directly threatened but the USA as well. While President Trump and Kim Jong-un met in Singapore in June 2018, there remains distrust and dangerous uncertainty.

Professor Moorcraft is superbly qualified to trace the history of this small rogue nation that represents a major threat to world peace. He goes on to examine the political and military implications.

The author’s forty year experience of Asia provides absorbing insights into the realities of North Korea and its ruling family. North Korea continues to present a serious threat to world peace and the Korean War has still not been fully terminated in a Peace Treaty. An understanding of the threat and the aims of its leaders is of vital importance. – Most Highly Recommended.

A balanced and insightful exploration of North Korea, accessible and succinct, and from a knowledgeable and informed author.

This smashing book written by Professor Paul Moorcraft is a tour de force, he has taught politics and journalism and it shows.The book is very approachable and written in a style which assists the novice to keep up with the plot dealing with the vagaries of North Korea it's not always that easy. I would say that this should have been entitled " All you ever wanted to know about North Korea but were frightened to ask." If you were starting a military book library you would do well to buy this book first to find out how governments control the people, the machine of state and their own dubious family. Kim two and three have managed the process of inheriting their fathers totalitarian state in a way which can only be admired by those who study the politics reale. How can this small state keep the Russians Chinese and the USA on its toes is explained in simple terms to enable us to understated nuclear politics. I am going to give this book five mushroom heads and its potentially going to be my book of the year. If you study warfare you need this on your shelf.

This is an engaging and informative work.

Moorcraft gives us a book that makes us understand many of the dynamics of power behind an extremely mysterious state and far from our way of thinking.

North Korea is a controversial and isolated country and the author of this book goes into how they came to be an enemy to so many others. The history of this country is fascinating and the author made sure to highlight important events in its history, but didn't go overboard and write a book that would bore those non-history fanatics. This is a great resource for anyone that is wondering why North Korea has such contentious relationships and of the rise of its leaders.

I've been fascinated with North Korea for years now and have read most of the major works written on it. If someone asked me where to start reading to understand North Korea, I would point them to this book. It is a wonderfully succinct primer covering both the history of how we got here, where we are now, and what the future might look like without overwhelming the reader with all of the nuance and detail that some longtime North Korea watchers find fascinating, but novices might find tedious. The bibliography is solid, a testament to the Moorcraft's ability to condense 70+ years of complicated history into a short book while thoroughly covering the subject matter enough for someone well-versed would be pleased, but not so much as to overwhelm those with casual interest. The writing strikes a great balance between a serious academic overview and the inevitable humor that must come from discussing some of North Korea's overzealous and bombastic rhetoric.

This book explains how the Kim family has retained power in North Korea initially through the luck of having two superpower communist dictatorship backers and when that support became less reliable, by building its own nuclear deterrent. The author explains how the Kim leadership has leveraged security for themselves and their circle at the expense of the general population, of whom I can only and with apologies paraphrase the immortal words of Midge Ure; Tonight thank God its them instead of you. A truly shocking exposition of State abuse of its people that explains how dictatorships survive.