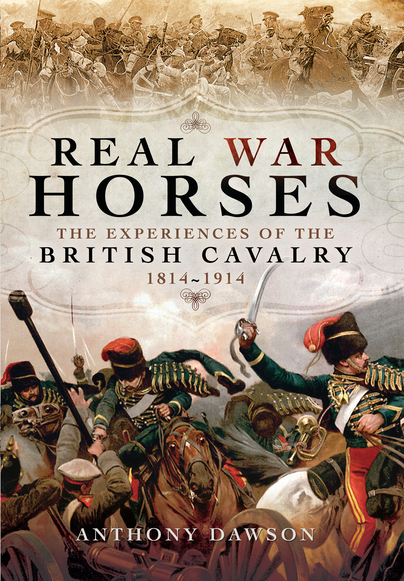 Add to Basket
Add to Wishlist
You'll be £25.00 closer to your next £10.00 credit when you purchase Real War Horses. What's this?
+£4.50 UK Delivery or free UK delivery if order is over £35
(click here for international delivery rates)

Many histories have been written about the conflicts the British army was involved in between the Battle of Waterloo and the First World War. There are detailed studies of campaigns and battles and general accounts of the experiences of the soldiers. But this book by Anthony Dawson is the first to concentrate in depth, in graphic detail, on the experiences of the British cavalry during a century of warfare. That is why it is of such value. It is also compelling reading because it describes, using the words of the cavalrymen of the time, the organization, routines, training and social life of the cavalry as well as the fear and exhilaration of cavalry actions. Perhaps the most memorable passages record the drama and excitement of cavalry charges and the brutal, confused, often lethal experience of close-quarter combat in a mêlée of men and horses. Few books give such a direct inside view of what it was like to serve in the British cavalry during the nineteenth century.

The bulk of the book is taken up with eyewitness accounts of the exploits of the British cavalry during this period, using letters home written by the soldiers. Many of these were published in contemporary newspapers, and they have an immediacy that later memoirs don’t always match. The letters are woven into the narrative, with the relevant sections extracted, so we don’t get bogged down in repetition or too much detail. The individual correspondents give us a fascinating view of the life of the cavalryman, their experience in battle, and their own conclusions about what was going on.

Real War Horses, despite its odd title, actually focuses on a military arm and the men in its service, or, as its subtitle puts it, “the experiences of the British Cavalry” from 1814 to 1914. An excellent introductory chapter providing sweep and context, “Horse and Rider,” precedes a close and expertly drawn set piece on the iconic battle of Waterloo. The book then moves systematically through chapters on “colonial adventures,” the Crimean War, the Indian Mutiny, the Second Boer War, and the Great War of 1914-1918. This simple and solid design allows Dawson at once to survey a broad history, to study its key moments, and (its raison d’être) to conjure individuals experiencing those moments.

An exemplary work of epistolary nonfiction, Real War Horses is based on “letters and diaries written by British soldiers serving in various campaigns and printed in contemporary newspapers.”

This book can be heartily recommended as its presentation of 'the real war horses' throws light on so many aspects that are so often overlooked or ignored in the story of British cavalry.

It benefits from a wealth of first-hand accounts, many of them previously unpublished, and goes into detail on the organisation, routines, training and social life of the cavalry as well as their experiences on the battlefield.

Anthony Dawson is a eminent historian who is recognised as a expert on the history of the British Army in the nineteenth century. He has previously published books on Napoleonic Artillery, British Cavalry and the Crimean War.
This book is the first to concentrate in depth the role of the cavalry during a century of warfare. The book is divided into seven chapters. The first chapter deals with the functions of a cavalry on campaign, acquisition of horses, types of horses, training of horse and rider, training in wartime and life in barracks.
The subsequent chapters each covers a history of campaigns: Waterloo, colonial adventures, The Crimean War, the Indian Mutiny, South Africa and World War 1.

The narrative of the book draws on many primary sources, unpublished accounts, personal letters, and local and national newspapers articles. It contains first-hand accounts illustrating the fear and trepidation of a cavalry charge. Some of the most memorable abstracts record the soldiers confusion and experience of close quarter combat. The extensive notes at the end of the book illustrate exactly how much in-depth research went into the writing of this book. There is also a bibliography to accompany the notes.

Many histories have been written about the conflicts the British Army was involved in between the Battle of Waterloo and World War One. There are detailed studies of campaigns and battles and general accounts of the experiences of the soldiers. But this book is the first to concentrate in depth, in graphic detail, on the experiences of the British cavalry during a century of warfare, which makes it of such great value. It is also compelling reading because it describes, using the words of the cavalrymen of the time, the organization, routines, training and social life of the cavalry actions.

Anthony Dawson's The Real War Horses provides a contemporary, readable and updated account of the role that horses have played in war fare. Many books have been written about wider campaigns of the British Army, whilst others have been written with a specialised focus on the Cavalry stucture, uniforms and equipment.

The book focuses on the key involvement of the horse in conflict throughout the modern period including the Horse and Rider, The Muddy Fields of Waterloo, Colonial Adventures, The Crimean War, The Indian Mutiny, Imperial Yeomanry in South Africa and Horsemen in the Trenches in the Great War. But, a crucial aspect of this book is its concentration upon the role of cavalry as a whole within war in the modern period, and the role of the most crucial living creature of them all to this, apart from man; the horse.

This book has been thoroughly researched, based upon letters and diaries written by British soldiers serving in different campaigns, and printed in contemporary newspapers. In turn, they provide us with in depth personal thoughts and feelings of the men who wrote them, demonstrating the humanity of them. A crucial part of this is demonstrated by the Crimean War in the sense that it was possibly the first media war with intense scrutiny from domestic press. The author makes clear from outset his research approach for accessing these letters thus making the reader aware of their historical importance and usefulness as being a direct record from the period covered, but also how to be cautious of them given their oral nature.

Dawson gets the readers straight into the guts of what the cavalry was; and important direction for someone reading this area of military history for the first time. This detail includes important facets such as the a description of the type of man required for heavy and light cavalry, horse breeding, purchasing, uniform and appearance......