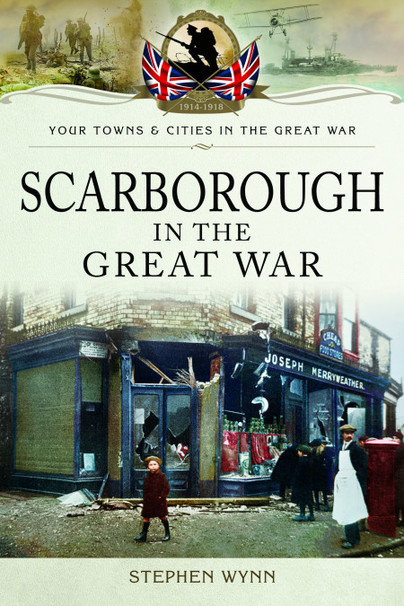 Scarborough in the Great War (Paperback)

Add to Basket
Add to Wishlist
You'll be £10.49 closer to your next £10.00 credit when you purchase Scarborough in the Great War. What's this?
+£4.50 UK Delivery or free UK delivery if order is over £35
(click here for international delivery rates)

In the early months of the war, for most people Scarborough was just another town somewhere in northern England, where exactly, they weren't entirely sure. But all of that changed at 8 am on the morning of 16 December 1914, when three vessels of the Imperial German Navy positioned themselves about 10 miles off of the north-eastern coastline and opened fire. The ensuing attack lasted for some 30 minutes and by the time it was over, 78 people, including women and children, had been killed and a further 228 were wounded.

The disbelief at how the attack had been allowed to take place was keenly felt by the British public, and the Government were quick to turn the attack to their advantage by making it part of a propaganda campaign 'Remember Scarborough', which they used on Army recruitment posters.

If it hadn't been before, the war had suddenly become a harsh reality for the entire nation, and the town of Scarborough was now well and truly on the map.

After the war, the names of the hundreds of young men from the town who had been killed on a foreign battlefield, or the in the icy waters of the high seas, were commemorated on the Scarborough War Memorial at Oliver's Mount. All of these names, as well as those who had been killed in the raid of 16 December 1914, are a true testament to the price Scarborough paid for playing her part in the First World War.

It's the kind of title anyone interested in their local history will find fascinating.