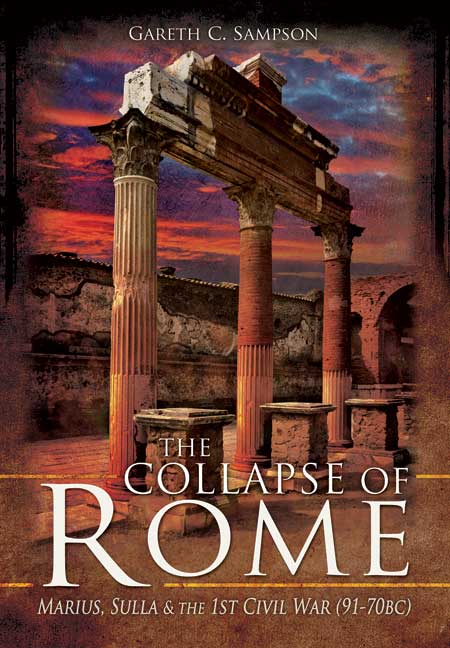 The Collapse of Rome (ePub)

Click here for help on how to download our eBooks
Add to Basket
Add to Wishlist
You'll be £4.99 closer to your next £10.00 credit when you purchase The Collapse of Rome. What's this?
Need a currency converter? Check XE.com for live rates

By the early first century BC, the Roman Republic had already carved itself a massive empire and was easily the most powerful state in the Mediterranean. Roman armies had marched victoriously over enemies far and wide, but the Roman heartland was soon to feel the tramp of armies on campaign as the Republic was convulsed by civil war and rival warlords vied for supremacy, sounding the first death knell of the Republican system. At the centre of the conflict was the rivalry between Marius, victor of the Jugurthine and Northern wars, and his former subordinate, Sulla. But, as Gareth Sampson points out in this new analysis, the situation was much more complex than the traditional view portrays it and the scope of the First Civil War both wider and longer. This narrative and analysis of a critical and bloody period in Roman history will make an ideal sequel to the author's Crisis of Rome (and a prequel to his first book, The Defeat of Rome).

These events were of great importance in setting the stage for the final generation of the Republic, and with The Collapse of Rome, Sampson helps throw fresh light on them, making this a valuable read for anyone interested in Roman History.

"The collapse of Rome" is well documented and the author made a good job presenting protagonists and the context that led to the collapse. When we compare to the practice of politics today we realize that probably nothing has changed. Everyone wants more power and each country wants more territory.

I thoroughly enjoyed this book. I've been reading a fair bit about the Romans lately, and "The Collapse of Rome" stands out among the best. What do we know for sure? How do we know it? What's missing? What can we guess about what's missing? These questions are answered in a very well laid out and accessible way, making that part of history a little bit more real.

This was a very factual, detailed account of the Roman Empire around the first century B.C, under tge dictatorship of Sulla. This was a very difficult time in the early Roman Empire and glad this was the focus of the book instead of later times highlighting issues with the Mongols and Armenia and anyone else that had issues. Very well researched and a great way study Roman history.

The author has provided a very readable insight into a period of Roman history that is very important but a mystery to most people. He has included photo plates, sketches and maps that very effectively support the text. The only feeling by the end of this book, and its very helpful end notes, is that it will then be necessary to reconsider any impressions formed before reading the book.

This is a very readable insight into a period of Roman history that is very important but a mystery to most people. He has included photo plates, sketches and maps that very effectively support the text. The only feeling by the end of this book, and its very helpful end notes, is that it will then be necessary to reconsider any impressions formed before reading the book.