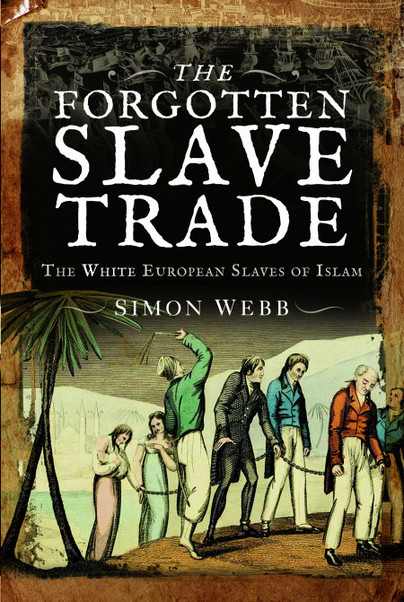 The White European Slaves of Islam

Click here for help on how to download our eBooks
Add to Basket
Add to Wishlist
You'll be £4.99 closer to your next £10.00 credit when you purchase The Forgotten Slave Trade. What's this?
Need a currency converter? Check XE.com for live rates

A century before Britain became involved in the trans-Atlantic slave trade, whole villages and towns in England, Ireland, Italy, Spain and other European countries were being depopulated by slavers, who transported the men, women and children to Africa where they were sold to the highest bidder. This is the forgotten slave trade.

Starting with the practice of slavery in the ancient world, Simon Webb traces the history of slavery in Europe and examines the experiences of those who were forcibly taken from their homes. He describes how thousands of European boys were castrated and then sold in Africa and the Middle East, and also explains how the role of the newly-independent United States helped to put an end to the trade in European and American slaves. He also discuss the importance of towns such as Bristol, which was an important staging-post for the transfer of English slaves to Africa over 1,000 years before it became a major centre for the slave trade in the eighteenth century.

Reading this book will forever change how you view the slave trade and show that many commonly held beliefs about this controversial subject are almost wholly inaccurate and mistaken.

A definite recommendation for anyone interested in broadening their knowledge of historic slavery, “The Forgotten Slave Trade” is a well researched view on the morality, mechanisms and history of one of humanities past blights.

This is one of those books/subjects that you either know about or have never heard about it. I had heard about a white slave trade and when you think about it, it doesn’t come as big surprise. While I had heard about it I hadn’t done much research into it, but what an extraordinary story which is well written and approached by the author Simon Webb. At a time when there is a lot in the news about BLM, in a way this was a fascinating book in reverse but I found the author doesn’t shy away from the treatment people suffered. In a way the way humans have been treated over the years, nothing should surprise anyone as to what humans will do to other humans for money. I suppose it makes it more shocking when you find it happened to people so near to home. Also if you think about things more specifically these things should come as no surprise to anyone, as I remember the Roman Empire used slaves as did the Vikings, Egyptians people from the Middle East and more. This is a really good book that should be more widely read, certainly one I would recommend to others.

Overall this is definitely a book well worth reading if only to bring this hidden example of slavery to a wider audience.

Just when we thought we knew everything about the historical trading of humans, along comes Simon Webb with this absolutely riveting book on the white slave trade! What an interesting book, and I completely agree with other reviews that this book should be included in the battery of publications on this subject. While it cannot mitigate the suffering and depravity suffered by Black slavery, it does provide another insight into the views and moral values of men who will do and sell anything to turn a profit. I would have no problem incorporating this book in a class lesson or as part of a curriculum on the slave trade. Very well done Simon.

Simon Webb continues these investigations, uncovering some hard truths along the way.

This book taught me so much, from the history of Islam to the settlement and success of the Ottoman Empire. Author Simon Webb also link many, if not most, of today or recent History to the slave trade so many Christian have suffered from for so many centuries. I could go on and on about the topics discussed and lessons learned but I will simply advise you to get yourself a copy of this novel and learn for yourself. The book includes meaningful illustrations and is divided into clear topics, which can help you navigate if you are interested in a particular geographical area or period.

Webb's narrative is much more than a settling of the counts with history, as the freshness of his lucid analysis leads us to understand, looking at how many states tried to react to the threat of Barbary pirates and slaveholders, dynamics that are still relevant today in international politics. Webb once again takes us to look at some mechanisms of history in a simple but profound and well-documented way, and one of his books is once again extremely interesting and enjoyable, to bring out from the shadows what was once an "other" slave trade. , longer, more terrible, more implacable than the already terrible one that worked for years between Africa and America. Slavery, a terrible experience of all human societies, was not the fault and prerogative of a single culture, but it was widespread and was present for a long time, even up to almost our days, in other parts of the world. I deeply recommend this book to learn about another part of history and better understand many of the current events, the fruit and legacy of dynamics that began many centuries ago in the Mediterranean.

I had high expectations from Forgotten Slave Trade by Simon Webb* – The White European Slaves of Islam – but I had no idea how amazingly interesting it is. If you read only one non-fiction book this year, make it this one. What this book makes, by talking on this so unknown part of the history, is to challenge our assumptions.

The book is written with respect for such a hard subject. Black African slaves are mentioned and comparisons are made, but he makes the point, again and again, that any kind of slavery is horrifying and inhumane. The subtitle points to Islam, but Christianity and Judaism are mentioned too. The book is not at all anti-Islamic... If you want to know more about British slaves, castration of slaves, why Bristol has more links to slavery than the trade in black people, you would need to read the book. I don’t want to talk too much about it, so I don’t spoil it. 5/5 stars

A very interesting review of a terrible time in our world. Obviously excited about peeling off another layer in the history of slavery, the author brings keen enthusiasm to their exploration of the topic.

This book will appeal to researchers or people with an interest and knowledge of the history of slavery or England's naval history, An insightful read.

I knew quite a lot about the subject, but I realize that most people probably do know too little about this part of history. Naturally some things were news to me as well, and indeed, it is interesting to read about this subject in a compact book. The Arabs and Ottomans were some slave traders... I had also not realized the important role Bristol had in slave trade.

I appreciate that these more hidden aspects regarding slave trade are written about. I’ve never really understood why we try to hide and forget some parts of our history. How can we learn from our past mistakes if we are not willing to be open about them? If we only stick to what we learn in school or watch on TV our view of our world and it’s history is both narrow and misrepresented. I’m jubilant to see that there are authors out there writing about these subject, so thank you, Simon Webb!