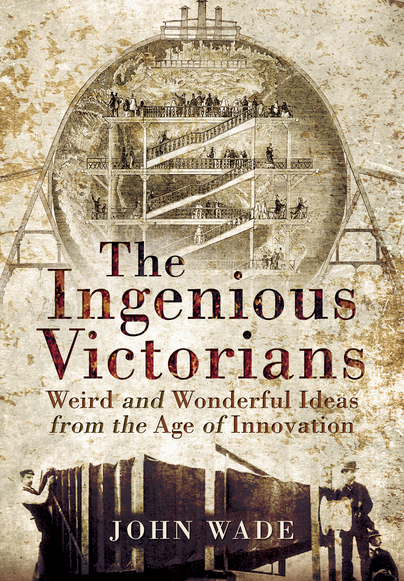 Weird and Wonderful Ideas from the Age of Innovation

Featured in the Daily Mirror

Featured by the Mail Online

As recommended by Sky News

You'll be £4.99 closer to your next £10.00 credit when you purchase The Ingenious Victorians. What's this?
Need a currency converter? Check XE.com for live rates

We all know that some of the greatest inventions came from the Victorian age, the successors of which are still with us today. But this book is not entirely about those. It’s more about some of the weird and wonderful inventions, ideas and projects – some successful, others less so – that have largely been forgotten. Where well-known inventions or design concepts are included, it is from a perspective not previously appreciated, with details of the ingenious technology and thinking that led to their introduction and success.

Here you can read how Victorian innovators were responsible for: the world’s largest glass structure; an electric railway with lines under the sea and a carriage on stilts 20 feet above the waves; a monster globe that visitors could enter to see the world’s land masses, seas, mountains and valleys modelled on the interior; cameras disguised as bowler hats and many other everyday objects; the London Underground as a steam railway; safety coffins designed to prevent premature burial; unusual medical uses for electricity; the first traffic lights, which exploded a month after their erection in Westminster; and the birth and rapid rise to popularity of the cinema ... as well as many other ingenious inventions.

From the practical to the preposterous, this book is packed with inventions and large-scale engineering feats. Why was Big Ben so named and how did they manage to get it into position? Read all about it and many more.

From the practical to the preposterous, this book is packed with inventions and large-scale engineering feats.

John Wade writes engagingly, the subjects are well researched and the chapters all tempt the reader to find out more about the subject covered. The book is beautifully produced and illustrated with copious amounts of original prints and etchings of the subject matter. It is because the illustrations are taken from the magazines and periodicals of the age that they give a very evocative feel to this book which fits the subject matter perfectly and encourages the reader to study them more closely. This is perfect as a stocking filler and would engage anyone with a technical background and an interest in social history.

This book is subtitled 'Weird and wonderful ideas from the age of innovation' and of that there can be no argument. Even the most unscholarly schoolboy will be aware of the incredible advances, technological achievements and occasionally bonkers ideas that were produced during the Victorian period (and not only in Great Britain it should be pointed out) and this book is a celebration of some of the best/worst/infamous and celebrated from the era.
The contents cover such wondrous capital-centric curiosities as the FIRST channel tunnel, the London sewer system, the Crystal Palace and Great Exhibition of 1851, along with excursions into the new fangled science of fooling/ripping off the gullible public such as the health benefits of electrocuting ones nether regions and the fear (and solution) to being buried alive, to several hair raising real life railway related transport attractions that are beyond belief - do you fancy a ride in a 40 foot high gondola THROUGH the surf of Brighton beach, powered by electrical cables that are part of the mostly submerged track?
The book has a very brief introduction that places the position of Great Britain (and in particular Queen Victoria and husband Albert) within the World and why, following the industrial revolution, there was such an incredible flowering of ideas, plans and implementation of so much of what we today may well take for granted - clean water for instance.
The authors research and detail are obvious without ever feeling like a history lesson, and I was reminded of a series of TV programmes by a chap called Adam Hart Davies that were aired in the 90's - ('what the Victorians did for us') - knowledge and genuine enthusiasm will always be a winning combination whatever the subject matter.
As a photographic collector and user I was happy to see there is a chapter on the world's biggest camera, an excellent one on disguised cameras, a further one detailing the birth and rapid development of the photographic process(es) and finally one on early cinema .
I give this book my highest recommendation as a one that will appeal to anyone with an interest in history, invention, design, success and failure, and even as a relatively non flag waving briton I felt thoroughly proud to be British whilst reading it.

We're used to thinking of the Victorian era as the heyday of invention and technological progress, where nothing seemed impossible. This book is firmly a celebration of that, but also reminds us of the many odd Victorian inventions - 'detective cameras' disguised as bowler hats, anyone? - which came and went as quickly as an episode of Dragon's Den today.

Cameras in weird and wonderful guises have a chapter of their own, reflecting the author's particular specialism, but there is much more here besides. Inevitably the Great Exhibition features prominently, and opens the book, and it's good to see a chapter about how it was moved to what is now Crystal Palace Park as well as its original incarnation.

Also to be found in these entertaining pages are tales of numerous forms of transport, over ground, underground and even underwater, and inventions which reflect social concerns of the time, such as safety coffins to save people buried alive. Major innovations such as Bazalgette's London sewer system, and little niceties such as Christmas cards are all explored along the way.

Many years ago, when discussing Victorian ‘inventiveness’ this reviewer was told that ‘The Victorians didn’t know something couldn’t be done, so went ahead and did it anyway’. That, in essence, summarises this volume; the things that Victorians did because they didn’t know they couldn’t.

The author defines the ‘Victorian era’ as being the period 1837-1891 when Queen Victoria was Monarch of both Great Britain and the lager British Empire, this work naturally tending to concentrate on the eccentricities, successes and failures of ‘inventive’ residents of Great Britain during this time. As a result, the reader is introduced to such worthies as the builder of the Crystal Palace, the many inventors of the phonograph, and those involved in the design and construction of both Big Ben and the Houses of Parliament in London. Many other individuals, some perhaps eccentric, who did feats of daring do during this period, also make their appearance. In addition, the subjects covered include such wonders as the world’s biggest camera, electric submarines and London’s well-known Cleopatra’s Needle. Although largely Anglo-centric in its focus, inventors and creations from Germany, France and the United States of America also make their appearance, their relevance to the topic under discussion being explained clearly and objectively.

This book is well written in a clear, easily-read and informative style. It consists of an Introduction, followed by 28 Chapters, each focusing on a specific subject. Within the individual chapter, photographs and engraved images provide visual reference to the subject under discussion. A Bibliography and Index are also provided, while the sources of the images used within the work are noted in a separate Picture Credits section.

Within this volume’s covers, and on the basis of its title, this reviewer expected to find examples of ‘Victorian Inventiveness and Ingenuity’ from both the United Kingdom itself, and from within the larger British Empire. The Victorian ‘Age of Innovation’ was, after all, a time where, as already noted, ‘The Victorians didn’t know something couldn’t be done, so went ahead and did it anyway’. In this expectation he was disappointed, finding instead that the work had a very definite United Kingdom, European and North American focus.

In addition (and despite the title) the work ignores Victorian inventiveness in the field of international commerce. In this reviewer’s opinion, the absence of such items (of which there were many) reduces its appeal and potential audience. Rather than being an authoritative discourse celebrating the inventiveness that saw Victorian Ingenuity accomplish the impossible in many parts of the world, the volume is inclined toward the ‘quirky’ rather than the practical. What results is essentially a narrative of curiousities and oddities.

There will undoubtedly be those who will purchase this work on the basis of the ‘oddities’ that it contains. Such buyers will be seeking a detailed recitation of the more eccentric aspects of the Victorian era, and for them this volume will serve that purpose well.

We've seen some stunning TV series about the Victorians, the latest being Full Steam Ahead, which examined the mind-blowing changes brought about by the steam railways that filled every corner of Britain during the reign of Queen Victoria. Not everything they invented, it seems, was quite as successful. John Wade's brilliant book contains some of the weirdest and funniest inventions imaginable, some fairly simple, others reminiscent of William Heath Robinson - all of them fascinating, though, and John's book is superbly readable.

Well written, humorous in places, and extremely well researched. It's a wonderful celebration of the weird and wonderful Victorian inventions, ideas and projects that have largely been forgotten, but also of some that proved tremendous successes, albeit not always in the way they were supposed to.

'Welwyn author John Wade gives a fascinating insight into the thinking and technology that led to some of our everyday objects and those that didn't quite make it.'