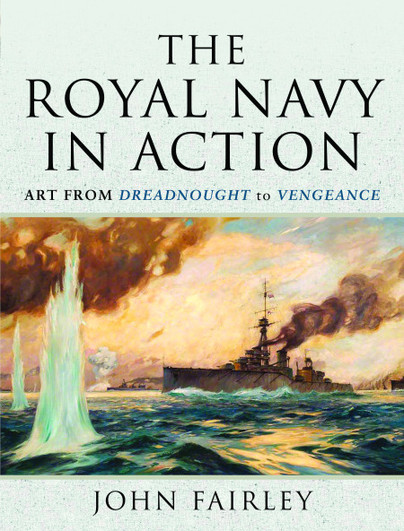 The Royal Navy in Action (ePub)

Art from Dreadnought to Vengeance

Click here for help on how to download our eBooks
Add to Basket
Add to Wishlist
You'll be £15.59 closer to your next £10.00 credit when you purchase The Royal Navy in Action. What's this?
Need a currency converter? Check XE.com for live rates

At the turn of the 19th and 20th Centuries, with the British Empire encompassing the globe, the Royal Navy indisputably ruled the waves. Times change but the magnificence and drama of warships at sea, whether in peace or war, remain an inspiration to artists. This fine book brings together a collection of superb art works which bear witness to the majesty of these mighty ships in action and, at the same time, are a memorial to the dangers, heroism and victories at sea.

The reader is treated to a feast of the finest maritime paintings depicting the Royal Navy’s dramatic confrontations of the last 120 years. Masters such as Norman Wilkinson, Richard Eurich and William Wyllie cover the two World Wars. Other works illustrate the crucial role of the Navy in the Falklands War and the latest aircraft carriers are also represented.

The author draws on his own naval service experience to describe the background to, and significance of, the ships and conflicts that these paintings so vividly record.