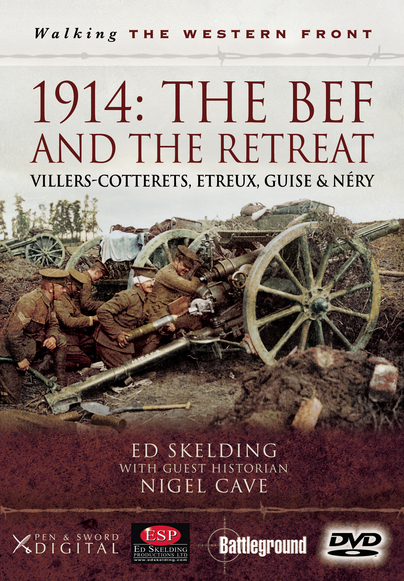 Filmed on location at the key locations of the opening Battles of the First World War and analyses some of the key battles and events at First Ypres.

Designed as a companion to the best selling Battleground series of books by Pen and Sword.

Filmed by acclaimed film-maker Ed Skelding, whose expertise in the field and strong Great War knowledge compliment the film.

Also presented by guest historian Nigel Cave, the series editor of the Battleground series of books and prolific Pen and Sword author.

The story of the Battle of Mons is relayed by film maker Ed Skelding, and military historian Nigel Cave who is the series editor of the excellent Battleground Europe guides to the battles of the Western Front. The focus on Mons brings to life visually to the fore how this quiet Belgium town was to witness the first great battle between the British and the German during the First World War. The Battle of Mons was fought over two days in late August, 1914, marking the start of the British action on the Western Front.

For anyone who has watched any of this series of documentaries, the ultimate strength of them is two fold.

Firstly if you have not previously had the opportunity to visit the battlefields, they serve the fantastic purpose of not only inspiring you to want to visit, to plan a visit, and also give you a fantastic overview of the sequence of events and ground at particular locations. At the same time, they bring the locations into a modern concept with sweeping views of the ground. It is as near as you can perhaps get to 'being' on a battlefield trip, but actually not visiting in the sense that the discussion between Skelding and Cave is informative, laid back, but focussed on each element of the battle therefore guiding you through the locations.

Secondly, and equally important, for anyone who has already visited the battlefields, but has the overriding desire to return and learn more, then these documentaries consolidate knowledge and interest already gained, therefore enabling you to find out more from home, and plan for future trips.

Interspersed with shots of different locations on the battlefield, there are excellent use of anotated maps showing key elements of the war as it was developing in the autumn of 1914. For example, the Schlieffen Plan, is shown, alongside modern shots of key locations. This is also built up with integrated pictures of the key Generals, telling the story of the opening shots of the Battle with coverage of key areas.

Throughout, it it great to enjoy the continued questioning and analysis of Nigel Cave who breaks down both the events that were happening at each stage, as well as the response of the key commanders in charge.  He gives great overview of the earlier stages of the battle. Like wise, he gives a good picture in his description of the wider British defence, but also their desperate fight. This is particularly poignant, clearly whilst describing the action at Nimy Bridge; just one of many actions fought during Mons, but probably which particularly stands out. We are reminded of the V.C. action's of Lieutenant Maurice Dease and Sidney Godley. Also, in terms of the more wider defence, detail is built up about the experience of the British soldiers, and their own experience of the ground. Great balacne is also encapsulated of the bravery shown during the battle by the action of Private Oskar Niemeyer who swum across the canal, under British fire, in order to operate the machinery on a swing bridge. As night fell upon the defence of the canal, the British fell back to the second line of defences prepared by Smith-Dorian

The dialogue between both these men fits in well with Skelding having a firm understanding of the key elements of the battle, but continually prompting Cave that little bit of extra detail, or querying key challenging questions of the ground and also the events as they happen. In turn he asks the questions which we too would be asking Cave, if we were there beside him on this ground.

Detail is built up the story of the defence of Frameries, and other actions. Cave gives a wonderful overview of how the BEF made its way south and did not fall into the German General Von Klucks trap, but at the same time detailing the desperate defence which the British army put up. He reminds us that both Armies were extremely shattered.  By the 24th of August, the British were in full retreat. We are reminded of the nature of the war at this stage, given the involvement of Cavalry units.