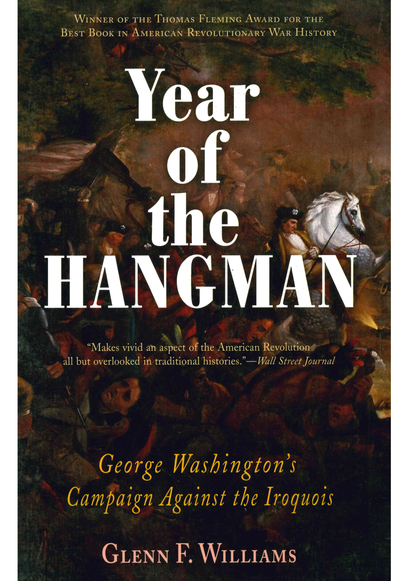 Year of the Hangman (Paperback)

George Washington's Campaign Against the Iroquois

Add to Basket
Add to Wishlist
You'll be £18.99 closer to your next £10.00 credit when you purchase Year of the Hangman. What's this?
+£4.50 UK Delivery or free UK delivery if order is over £35
(click here for international delivery rates)

After two years of fighting, Great Britain felt confident that the American rebellion would be crushed in 1777, the "Year of the Hangman". Britain devised a bold new strategy. Turning its attention to the colonial frontiers, especially those of western New York, Pennsylvania, and Virginia, Britain enlisted its provincial rangers, Tories, and allied warriors, principally from the Iroquois Confederacy, to wage a brutal backwoods war in support of General John Burgoyne's offensive as it swept southward from Canada in an attempt to cut the colonies in half, divert the Continental army, and weaken its presence around British-occupied New York City and Philadelphia.

Burgoyne's defeat at Saratoga sent shock waves through the British command. But the efforts along the frontier under the direction of Sir John Johnson, Colonal John Butler, and the charismatic Mohawk leader, Captain Joseph Brant, appeared to be impairing the American ability to conduct the war. Destroying Patriot settlements and farms across hundreds of miles of frontier, the British and Indian forces threatened to reduce Continental army enlistment, and more importantly, precious food supplies. Following the massacres at the wall-established settlements of Wyoming, Pennsylvania, and Cherry Valley, New York, the Continental Congress persuaded General George Washington to conduct a decisive offensive to end the threat once and for all. Brewing for years, the conflict between the Iroquois and colonists would now reach its deadly climax. Charging his troops "to not merely overrun, but destroy," Washington devised a two-prong attack to exact American revenge. The largest coordinated American military action against American Indians in the war, the campaign shifted the balance of power in the east, ending the political and military influence of the Iroquois, forcing large numbers of Loyalists to flee to Canada, and sealing Britain's fateful decision to seek victory in the south. In Year of the Hangman: George Washington's Campaign Against the Iroquois, historian Glenn F. Williams recreates the riveting events surrounding the action, including the checkered story of European and Indian alliances, the bitter frontier wars, and the bloody battles of Oriskany and Newtown.

GLENN F. WILLIAMS is a historian at the US Army Center of Military History in Washington, DC. He is author of the award-winning Year of the Hangman, about the 1778 Sullivan-Clinton campaign against the Iroquois, also available from Westholme Publishing.