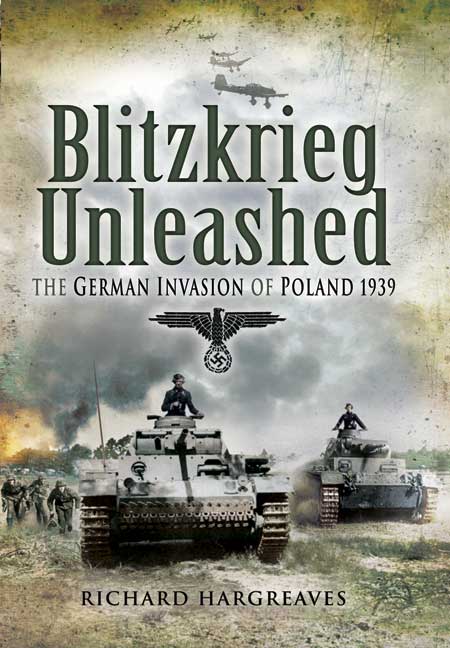 The German Invasion of Poland 1939

Click here for help on how to download our eBooks
Add to Basket
Add to Wishlist
You'll be £4.99 closer to your next £10.00 credit when you purchase Blitzkrieg Unleashed. What's this?
Need a currency converter? Check XE.com for live rates

At dawn on Friday 1 September 1939 the Germans launched their land, sea and air assault on Poland. The World became aware of the awesome power of Hitler's Third Reich and the limitless and ruthless nature of his ambition.

The Blitzkrieg (Lightning War) attack, spearheaded by Panzers, took the German forces to the gates of Warsaw in a week. The vital port of Danzig fell, crushed by naval and air bombardment and land assaults. The Polish Air Force, out-numbered and out-gunned, were driven from the skies. In a month Warsaw fell amid great bloodshed and in six weeks the Poles were defeated.

The speed of the German conquest was matched by its brutality. Lives and property meant little to the invaders and civilians and POWs were summarily executed. Jews received particular attention and these atrocities were not just perpetrated by the SS but soldiers of the Wehrmacht.

Blitzkrieg Unleashed is told in the words of those who conquered Poland, thanks to the author's research into letters, diaries, unpublished accounts, official documents and histories and newspapers.

To put the Invasion of Poland into context the author uses the first 3 chapters of the book to explain the circumstances leading up to it. The seeds of the conflict were sewn with harsh conditions imposed on Germany as part of the Versailles Treaty in 1919 about which French General Ferdinand Foch himself commented with an uncanny certainty that "This is not a peace. It is an armistice for twenty years"...

... The book draws heavily on the eye witness reports and testimony of the German fighting men which detail the thrill of the advance, the endless marches in the baking heat and the destruction encountered by troops full of the optimistic belief that that they were fighting for the future of their beloved Germany. To a lesser extent the book touches on the Soviet occupation of Eastern Poland two weeks after the German offensive began and also includes contributions from Polish soldiers and civilians who tell their side of the story and give the impression that the fighting wasn’t quite as one sided as has always been made out.

What can’t be denied is the speed of this modern form of warfare and the brutality that arose out of the invasion and this is covered over the closing chapters and Epilogue where both sides count the cost and we begin to see how the future will play out for the unfortunate Poles.

I wouldn’t class Blitzkrieg Unleashed as an all round view of the campaign, but if your interest lies in the German version of events then I’d highly recommended it.

Whilst it takes three chapters before it gets to the start line of operation
Fall Weiss, I think it is necessary for the author to go through some of the
history and circumstances that lead the participants into the conflict.

The author draws widely on actual eyewitness diaries, both personal and unit
and letters from the front line whilst quotes are used to drive along the
narratives.

The majority of the recollections included are from the German forces, but
there are a few quotes from the higher officers of the Polish forces and
non-combatants.

The things that will stay with me is the unison of the diaries in their
descriptions of utter destruction of all buildings and the red glow of the night
sky for the entire length of the German attack, and the Polish command accepting
total defeat and wanton destruction by holding out for long periods in enclaves
after the majority of their army and government had accepted defeat.

It does give a flavour of the circumstances of the German forces who fought
during this conflict and shows that some raised concerns about the conduct of
some of their soldiers during the fighting and the police forces that took over
Poland after the end of the "eighteen day operation".

Whilst it does add to the personal stories, and attempts to pull together a
coherent narrative I personally don't believe that it adds any great
information to the actual conflict for the wargamer although it does have a
series of Maps in the Appendix for the major battles and the various unit
dispositions.

The Invasion of Poland began at 4:40 am, with the German Luftwaffe attacking several targets in Poland. The Luftwaffe launches air attacks against Krakow, Lodz, and Warsaw. 2 Days later Neville Chamberlain announces that Britain is at War.