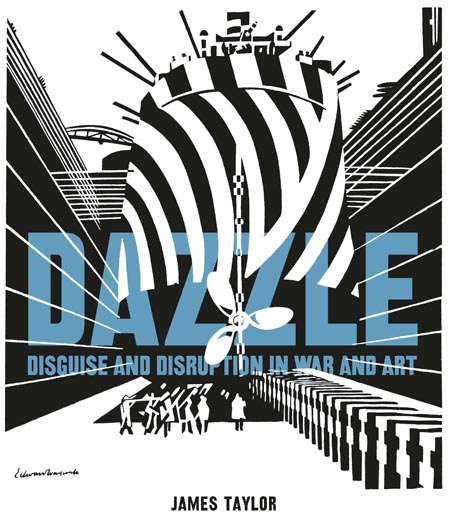 Add to Basket
Add to Wishlist
You'll be £20.00 closer to your next £10.00 credit when you purchase Dazzle. What's this?
+£4.50 UK Delivery or free UK delivery if order is over £35
(click here for international delivery rates)

In 1917 Dazzle painting, also known as Dazzle camouflage, was conceived and developed by the celebrated marine artist and then naval commander Norman Wilkinson. Dazzle rejected concealment in favour of disruption. It seeks to break up a ship’s silhouette with brightly contrasting geometric designs to make a vessel’s speed and direction incredibly difficult to discern, and thus confuse and deceive German U-boat torpedo-men.

Wilkinson’s scheme led to several thousand ships mainly from Europe, USA and Canada going to sea as the largest painted modernist ‘canvases’ in the world covered in abstract, clashing, decorative and geometric designs in a myriad of colours.

Wilkinson, however, was a conservative rather than an avant-garde artist and this new book explores what really influenced him in terms of developing Dazzle. It traces the development of the Dazzle aesthetic from theory into practice and beyond. It looks at the impact that Dazzle was to have on the modern art movements of Cubism, Futurism and Vorticism, especially in the work of Edward Wadsworth and Wilkinson and his hand-picked Dazzle Section artists. Through an examination of original archival documents, it offers some fresh perspectives into the origins, principles, development and implementation of Dazzle painting, and the competing camouflage schemes. It also examines the claims and counter-claims, and the bitter protracted battle, between Wilkinson and his rival John Graham Kerr for the lucrative ‘Royal Commission Award to Inventors’.

Dazzle camouflage was adopted internationally by the major navies, evolving into the more defined ‘disruptive’ camouflage, right through to the Second World War and beyond.

In the inter-war and post-war periods Dazzle: Disguise and Disruption in War and Art shows how the scheme influenced art, architecture, dance, design, fashion, music hall and theatrical performances and even the exterior appearance of cars. It also features a visual tribute to the vessels that have been painted with brilliant bold patterns inspired by Dazzle to coincide with the First World War commemorations including those by Sir Peter Blake and Tobias Rehberger. The book concludes with an assessment of whether Dazzle painting actually worked and highlights the commodification of Dazzle in fashion and through the sale of a wide range of gifts, prints and merchandise.

James Taylor is a former curator of paintings at the National Maritime Museum, Greenwich. Since leaving the museum he has established himself as a maritime art dealer and lecturer on a range of maritime subjects. He is the author of Marine Painting (1995) and Yachts on
Canvas (1998), The Voyage of the Beagle (2009), Careless Talk Costs Lives (2010) and Your Country Needs You: The Secret History of the Propaganda Poster (2013). Taylor is currently undertaking a PhD at the University of Sussex on the artists who sailed with Matthew Flinders on the voyage of HMS Investigator (1801-3) - the first recorded circumnavigation of Australia.