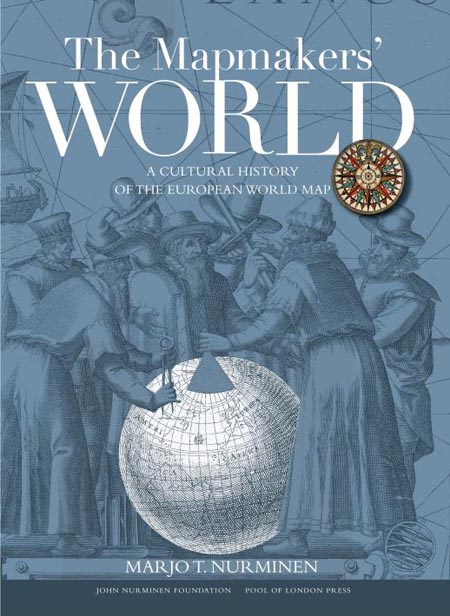 A Cultural History of the European World Map

Add to Basket
Add to Wishlist
You'll be £35.00 closer to your next £10.00 credit when you purchase The Mapmakers' World. What's this?
+£4.50 UK Delivery or free UK delivery if order is over £35
(click here for international delivery rates)

The Mapmakers’ World illuminates the fascinating cultural history of European world maps: what do historical world maps tell of us, of our perception of the world, and of places and peoples that are foreign to us? Who were the makers of these early world maps? How were the maps created and for whom were they drawn and printed? For what purposes were they used? What kind of information did they pass on? The answers to these questions open up a fascinating narrative of discovery and cartography relating not only to ideology and political power but also the histories of art and science.
Rigorously researched and informed by latest academic findings, The Mapmakers’ World is beautifully illustrated presenting some 300 maps from the world’s finest museums, libraries and private collections. The book gives us a revealing and captivating perspective on the development of European world maps from the Early Middle Ages up until the modern period, i.e. from the 8th century until the end of the 18th century.
The Mapmakers’ World is a major work which ambitiously showcases all of the early European world map traditions: Medieval world maps (T-O maps, mappa mundis, Beatus maps, etc.); Ptolemy’s maps; seafarers’ maps (portolan charts, planispheres and nautical charts), printed world maps and globes from the pre-Renaissance through to the Baroque era.
Furthermore, The Mapmakers’ World takes its readers through the history of European global discovery and cartographic research, and also brings to life the exciting times when many of these historical maps were first discovered in the 19th century, after centuries of oblivion. The volume includes dedicated features further exploring 100 of the most important cartographic masterpieces from the period. The book is written as an exciting, flowing narrative, rather than a catalogue or an encyclopedia, and it takes the reader on the ultimate voyage of discovery.

Marjo T. Nurminen (born 1967) is an archaeologist by education and specialises in the history of science. She has worked as a TV journalist at the Finnish Broadcasting Company YLE for more than ten years, focusing on science and its popularisation. Her book Tiedon Tyttäret (Sisters of Science) won the Tieto-Finlandia Award for the Best Finnish Non-Fiction Book in Finland 2008, and has been translated into a number of languages. Nurminen lives in Helsinki with her family.

Other titles in Pool of London...
Special Offer