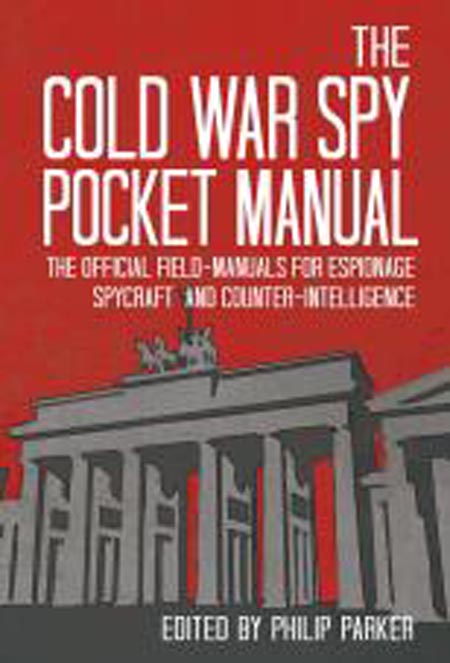 The Official Field-Manuals for Espionage, Spycraft and Counter-Intelligence

Add to Basket
Add to Wishlist
You'll be £6.29 closer to your next £10.00 credit when you purchase The Cold War Spy Pocket-Manual. What's this?
+£4.50 UK Delivery or free UK delivery if order is over £35
(click here for international delivery rates)

Some twenty-five years after its conclusion, yet with its echoes resonating once more in contemporary East-West relations, the rigors and detail of many aspects of the Cold War are becoming increasingly of interest. Furthermore, at the very same time many of the records of the period are beginning to become accessible for the first time. At the forefront of this unique conflict, that divided the world into two opposing camps for over four decades, were the security services and the agents of these secretive organizations. The Cold War Pocket Manual presents a meticulously compiled selection of recently unclassified documents, field-manuals, briefing directives and intelligence primers that uncover the training and techniques required to function as a spy in the darkest periods of modern history. Material has been researched from the CIA, MI5 and MI6, the KGB, the STASI as well as from the Middle East security services and on into China and the East. As insightful as any drama these documents detail, amongst many other things, the directives that informed nuclear espionage, assassinations, interrogations and the ‘turning’ of agents and impacted upon the Suez Crisis, the Hungarian Uprising, the ‘Cambridge Five’ and the most tellingly the Cuban Missile Crisis in 1962.

Philip Parker was born in 1965 and is a former diplomat having studied History at Cambridge and International Relations at Johns Hopkins University’s Bologna Center. He has written widely on the worlds of late antiquity and the early Middle Ages and contributed reviews and articles to The Literary Review, The Financial Times and BBC History Magazine.

His latest book, the Sunday Times best-seller The Northmen’s Fury, is an in-depth and fascinating reappraisal of the Viking world, which ranges from the steppes of Russia, through the Scandinavian heartland, to the furthest flung Norse settlement in Newfoundland. Philip lives in London.

Other titles in Pool of London...
Special Offer