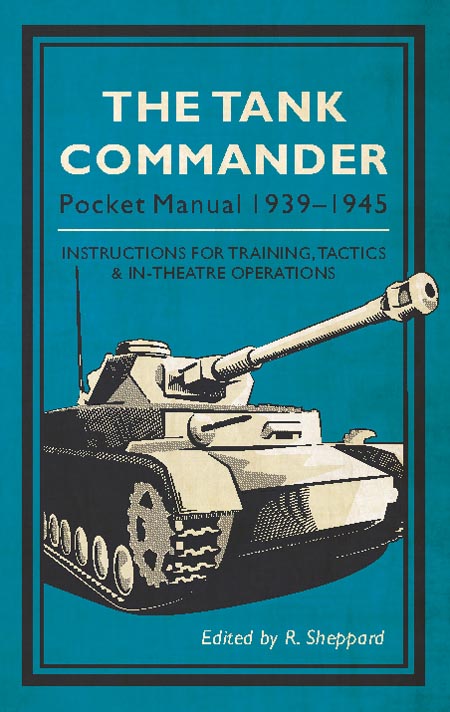 Add to Basket
Add to Wishlist
You'll be £8.99 closer to your next £10.00 credit when you purchase The Tank Commander Pocket Manual. What's this?
+£4.50 UK Delivery or free UK delivery if order is over £35
(click here for international delivery rates)

From the pioneering tactics and terror of the Blitzkrieg assault, through the carnage of Barbarossa, Kursk, the Desert War, and the Normandy Bocage and the Battle of the Bulge, there were perhaps no more unsettling and merciless positions to occupy in the Second World War than that of a tank commander. This new book puts the reader at the very heart of this “hell on wheels” and presents all of the original information required to perform this most dangerous of wartime battlefield roles. From training manuals and war office memorandums to combat reports and first-hand accounts, The Tank Commander Pocket Manual sits you in the turret position of commander of some of the most fearsome land vehicles. These include the Soviet T-34, the German Panther and its nemesis the American Sherman, the terrifying Tiger I as well as tank variants including flamethrowers and tank destroyers such as the Allied M10 and the StuG III. Original documents, diagrams, technical drawings and reports have been collated and compiled from archives and collections to include original Russian, German and English angles on the commander’s many roles including how to ‘run’ the rest of the crew of this most decisive weapon of the Second World War.

The Pool of London Pocket Manuals new Pocket-Manual series presents some of the most iconic military, naval and transport machines from the last 100 years by means of compiling the original documents, confidential memos, plans and artworks that contributed to their celebrated history. This approach allows the modern reader both to have an excellent understanding of the development of these extremely influential aircraft, AFVs, ships, automobiles and trains, but also provides the unique opportunity for further interpretation through the study of many previously unpublished original documents, diagrams and illustrations. Every volume in the series is skilfully compiled and researched by the leading experts in their field who also provide a lengthy contextualizing introduction. Superbly priced, retro-styled to their historical period, and beautifully hard-bound in debossed cloth, the Pool of London Pockets sell as self-purchase, gift and are excellently suited to book trade as well as to museum stores and heritage outlets across the world.

Ruth Sheppard read Ancient and Modern history at St John’s College, Oxford and has an interest in all periods of history. Recent published titles include Empires Collide: The French Indian War 1754-68, Extraordinary Heroes: Amazing Stories of Victoria Cross and George Cross Recipients and Alexander the Great at War.