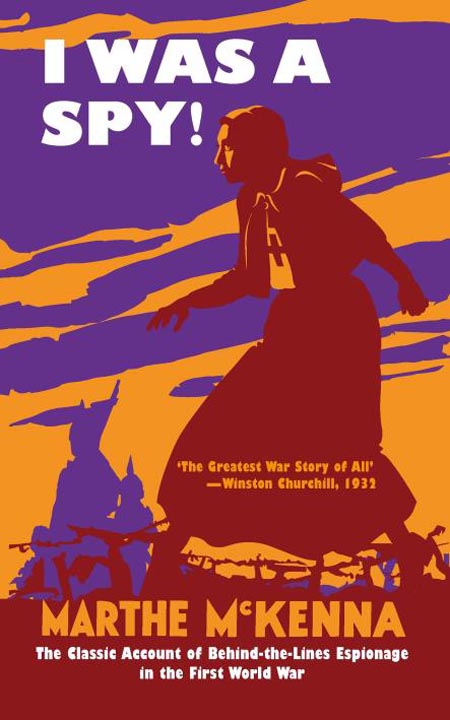 Add to Basket
Add to Wishlist
You'll be £12.99 closer to your next £10.00 credit when you purchase I Was a Spy!. What's this?
+£4.50 UK Delivery or free UK delivery if order is over £35
(click here for international delivery rates)

Order within the next 5 hours, 37 minutes to get your order processed the next working day!

“The Greatest War Story of All – Takes rank with All Quiet on the Western Front. She fulfilled in every respect the conditions which made the terrible profession of a spy dignified and honourable. Dwelling behind the German line within sound of cannon, she continually obtained and sent information of the highest importance to the British Intelligence Authorities. Her tale is a thrilling one … the main description of her life and intrigues and adventures is undoubtedly authentic. I was unable to stop reading it until 4 a.m.”
Winston Churchill 1932

With her medical studies cut short by the 1914 German invasion, her house burned down and her father arrested for suspected‘sharpshooting’, it was perhaps unsurprising that the multi-lingual Marthe Mckenna (née Cnockaert, codename ‘Laura’) was recruited by British Intelligence. At the time she worked as a nurse tending the wounds of occupying soldiers, and as a waitress in her parents’ café in the Belgian border town of Roulers.

I Was a Spy! is McKenna’s vivid narrative of these breath-taking adventures as she, aided by a gallant band of loyal locals, goes undercover to sabotage enemy phone lines, report suspicious activity or train movements, and even instigate an aerial attack on a planned visit by the Kaiser.
This thrilling account goes on to explain how, in 1916, the young nurse was caught by the Germans placing dynamite in a disused sewer tunnel underneath an ammunition dump. She was sentenced to the firing squad and only survived due to the Iron Cross honour received as a result of her earlier medical service . Mckenna was later mentioned by Douglas Haig in British Despatches and was awarded the French and Belgian Orders of the Legion of Honour for her espionage work.

In addition to receiving the Iron Cross from the Germans for her wartime contribution as a nurse, Marthe Mckenna (née Cnockaert, codename ‘Laura’) was later mentioned by Douglas Haig in British Despatches and was awarded the French and Belgian Orders of the Legion of Honour for her espionage work. I Was A Spy! was first published in 1932 with an extended Foreword by Winston Churchill and was made into a film in 1933 directed by Victor Saville and starring Madeleine Carroll. The success of the book encouraged Marthe to write further memoirs of her wartime exploits, and those of her small band of fellow spies, and also led to a series of espionage novels written in collaboration with her British husband John “Jock” McKenna.