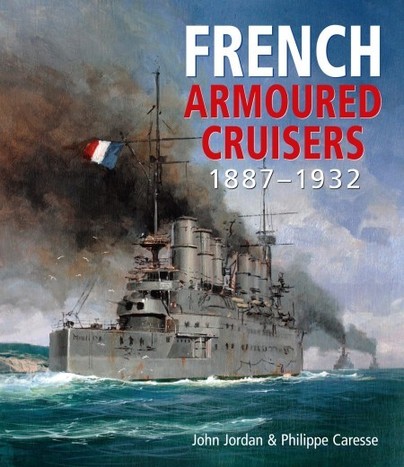 Add to Basket
Add to Wishlist
You'll be £40.00 closer to your next £10.00 credit when you purchase French Armoured Cruisers. What's this?
+£4.50 UK Delivery or free UK delivery if order is over £35
(click here for international delivery rates)

Of all the threats faced by the Royal Navy during the first years of the twentieth century, the one which stood out was the risk to Britain’s sea lines of communication posed by France’s armoured cruisers. Fast, well-armed and well-protected, these ships could have evaded any attempted blockade of the French ports and, supported by a worldwide network of overseas bases, could potentially have caused havoc on the trade routes. Between 1898 and 1901 the French laid down thirteen ships, and completed nine in 1903–4 alone.

This book has as its subject the French armoured cruisers built from the late 1880s until shortly before the outbreak of the Great War, beginning with the revolutionary Dupuy-de-Lôme, the world’s first modern armoured cruiser, and ending with the impressive six-funnelled Edgar Quinet and Waldeck-Rousseau. The primary focus of the book is on the technical characteristics of the ships. Detailed and labelled drawings based on the official plans are provided by John Jordan, and each individual class of ship is illustrated by photographs from the extensive personal collection of Philippe Caresse. The technical section is followed by a history in two parts, covering the Great War (1914–18) and the postwar years, during which the surviving ships saw extensive deployment as ‘station’ cruisers overseas and as training ships. This is the most comprehensive account published in English or in French, and is destined be the standard reference for many years to come.

Jordan and Caresse have given us a comprehensive work of reference, covering all manner of interesting topics, about these fascinating ships.

This beautifully presented book is full of interesting and unique information. Drawings are clear and the selection of photographs is outstanding while the technical descriptions are well organised and drawn from primary sources. This is by far the most comprehensive account of French Armoured Cruisers published in English or in French and is destined be the standard reference for many years to come. In conclusion this is an excellent book and an excellent companion to the book French Battleships of World War One by the same authors. Very highly recommended.

If you have any interest in the development of modern steel warships and their history, or indeed the French Navy of the 19th and 20th centuries, this book is a must. I have never been disappointed with John Jordan’s works and this book is so well illustrated by contemporary photographs from Philippe Caresse, the book is, quite simply, almost impossible to put down.

Jordan and Caresse have produced a wonderful companion to their earlier work on French battleships and as such, it certainly deserves a place on the bookshelf of any who acquired this first volume of their fruitful partnership... I can unhesitatingly recommend this volume to all interested in the naval history of this era - reviewed by Ian Yeates Regina, Saskatchewan

This is a fine work of research and shows great dedication by the authors who clearly have invested a great deal of time and effort into producing a truly comprehensive reference work on a subject that is rarely examined when compared against World War One and Two naval histories. This reviewer wholeheartedly recommends this book with its wealth of information and detail.

This is by far the best study of these striking ships in print, a work that combines a mastery of technical detail, policy debate and operational experience with comparative analysis of rival forces, and the structures of the French Navy. It will enhance attempts to understand the strategy of the Jeune Ecole, and British responses. It is also a work of art, with striking illustrations, fresh new drawings and the usual Seaforth standards of design and production. Essential reading for all those engaged with the period, and wider debates about commerce protection across the ages.

The book is beautifully illustrated with excellently reproduced photographs (all monochrome of course), and lots of diagrams of overall layouts and details of machinery etc. None of these help any of these cruisers look any more attractive, alas - French style clearly deserted them entirely when it came to warship design at the time!

As well as detailed facts and figures on each class of ship, there is sufficient detail on their design - including potted histories of the personalities involved - to give the reader a firm idea of what each ship was planned to do, vs what it ended up being capable of. Brief service histories round off the book, including actions in WW1.

A marvellous book and one I think will remain unsurpassed as the 'go to' reference on the subject.

The book is splendidly illustrated... The plans are some of the best I’ve ever seen, and combine detail with clarity to give a really clear picture of the internal layout of these ships. This is particually the case with the plans of the gun turrets, casemates and associated magazines and shell rooms, which go as far as showing the location of individual shells. This helps give a much clearer picture of how these ships actually operated in battle.

This is an excellent study of some of the most powerful warships of their time.

French Armoured Cruisers 1887-1932 is a splendid book for naval construction enthusiasts, modellers, historians of the period and even Francophiles. Vive la difference!

The important thing about this book is the amazing detail to be seen in the plans that John Jordan has brought to the table, along with some amazing photographs. A massive, stunning book.

A successful partnership of two leading maritime history authors looks at the development and deployment of French armoured cruisers 1887-1932. Careful research, well-written, and impeccably illustrated this is another definitive maritime history from the leading publishers in their field – Most Highly Recommended.

This book fits neatly into the Seaforth fleet of warship histories. The quality of the archive photography is as wonderful as always and the technical stuff is presented clearly for novice and expert alike. I like these books on many levels, from superficial pleasure with the glorious photography to meatier stuff I have gradually learned to appreciate and occasionally understand.

I really cannot get enough of books like this. Above all this book emphasises the importance of the cutting-edge design work carried out in France to lead the way with the armoured cruiser concept. The ships themselves bear a gallic individuality we can only admire from afar. Brilliant, absolutely brilliant.

The only comprehensive study of French armoured cruisers in English.