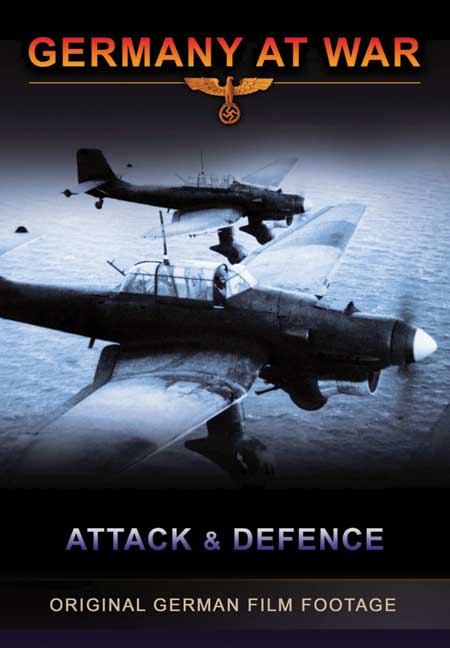 Add to Basket
Add to Wishlist
You'll be £10.49 closer to your next £10.00 credit when you purchase Germany At War - Attack and Defence DVD. What's this?
+£4.50 UK Delivery or free UK delivery if order is over £35
(click here for international delivery rates)

With the multitude of ground and sea battlefields used during the Second World War, the skies above them were invariably filled with many different types of aeroplane. From Hunters and Bombers to Torpedo Bombers and the iconic Fighters, supremacy in the sky was becoming more and more important as each day passed.

Whether attacking U-Boats with multi-engined bombers or using torpedo and dive bombers to attack massive targets such as Battleships and Aircraft carriers, the plane, in its varying forms, was a deadly piece of machinery that rained havoc on enemies above and below. The plane was also extremely useful against land targets, destroying tanks and supply convoys with ease.

The development of the plane meant that no one was truly safe, with long distance, four engine bombers used in missions against production works and cities. These planes, being able to travel hundreds of miles at a time, rained havoc on the towns and cities below. The two films on this DVD document the many missions flown by Hunters, Fighters and Bombers, and show the destruction these devastating machines delivered to enemy targets. Comprising of over fifty minutes of original archive material, as well as bonus galleries and documents, this DVD will appeal to all aviation enthusiasts.

This film tells the history of German artillery during the campaigns and its specialist roles on the battlefield which will be of interest to re-enactors and historians alike.

An interesting DVD that will be a much valued addition to any DVD war film collection.