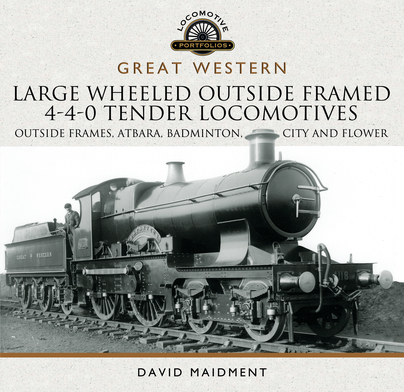 Add to Basket
Add to Wishlist
You'll be £25.00 closer to your next £10.00 credit when you purchase Great Western Large Wheeled Outside Framed 4-4-0 Tender Locomotives. What's this?
+£4.50 UK Delivery or free UK delivery if order is over £35
(click here for international delivery rates)

Order within the next 11 hours, 57 minutes to get your order processed the next working day!

This volume covers all the large wheeled outside frame classes, of 4-4-0 tender Locomotives, that once ran on the Great Western Railway.

The book has full details on each of the classes, with good quality pictures, diagrams name and number lists.

This work is also very useful to model makers, giving full details of mechanical and livery changes, that took place from the 1900s through to the early 1930s, when all except the preserved 3440, City of Truro, were withdrawn and scrapped.

The aim of the Pen & Sword series of locomotive portfolios is to make available to modellers and enthusiasts alike much of the previously unpublished research and photographs to bring up to date the legendary RCTS series on GWR locos. As with previous books, Mr Maidment has done a highly professional job bringing together all these sources into a coherent volume that will enable modellers to produce better and more accurate models of these four classes.

An impressive selection of photographs which illustrate all the major developments with each class and their use in traffic.

With more than a nod to William Dean’s work at Swindon, and the earlier Armstrong 4-4-0’s J.G. Churchward’s own designs soon looked anachronistic. Heavier trains saw them overshadowed by his classic GWR 4-6-0 engines. Yet they succeeded in traffic, benefiting from Churchward’s innovative boiler designs, Belpaire fireboxes and no dome. The preserved City of Truro is claimed as the first locomotive to have run at over 100 mph but there were Atbara, Badminton and Flower classes too. Many pictures included plus dimensions and weight diagrams.
All royalties go to that excellent charity The Railway Children.

Another of the great and essential works that should not be missing in our railway library.

This volume on the Great Western large-wheeled outside-framed 4-4-0s covers the fascinating period of transition from the elegance and style of the Dean era to the bold and forward-thinking practicality of Churchward.

As beautiful as Dean’s engines may have been, it was the revolutionary approach adopted by Churchward, drawing upon ideas pioneered in Europe and the USA, that would place the GWR at the forefront of British locomotive development for many years. The large-wheeled 4-4-0s provided the test bed for Churchward to develop his thinking as he tried different boiler and firebox configurations, as well as valves and ports designed to smooth the flow of steam. In rebuilding some of Dean’s engines – notably the supremely beautiful ‘Armstrong’ 4-4-0s – Churchward was accused of having scant regard for the appearance of locomotives and some of his early designs were certainly ugly ducklings. Yet the standards he established came to define the Great Western and influenced almost all the great steam designs subsequently produced in Britain.

Setting the pattern with the ‘fast ‘Badmintons’ and ‘Atbaras’, this superb series of 6ft 8½ in 4-4-0s culminated in the famous ‘City’ and ‘Flower’ classes which, for a few brief years, handled the crack GWR expresses. In some ways they were the victims of their own success; as traffic grew and loads increased Churchward responded with his magnificent two and four-cylinder 4-6-0s, largely rendering the bigger 4-4-0s redundant. All were withdrawn by 1931, the sole survivor being City of Truro.

One of the things that makes this book truly remarkable is the number of photographs of these engines at speed. David Maidment has made extensive use of images from the archives of the Great Western Trust, the Manchester Locomotive Society and the Model Railway Club and it’s wonderful to see so many previously unpublished pictures being brought to a wider audience. Remember that many of these photographs were taken at a time when the equipment was cumbersome and photographers had to work on location with heavy tripods, glass plates and slow emulsions.

A noble effort has also been made to include photographs of as many individual locomotives as possible, often portraying them at several stages in their lives. This book is surely destined to become not only an indispensable work of reference, but also a great enjoyment for all who love the Great Western Railway.