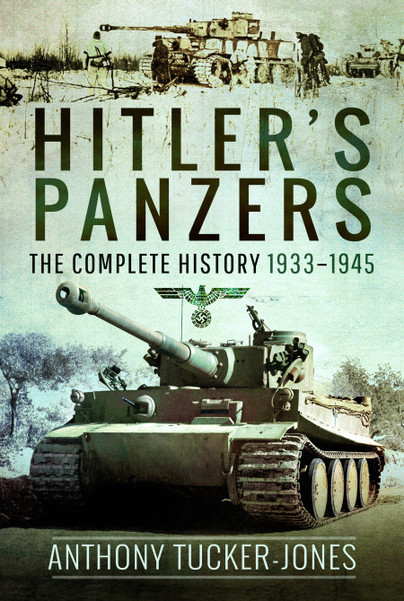 Add to Basket
Add to Wishlist
You'll be £17.50 closer to your next £10.00 credit when you purchase Hitler's Panzers. What's this?
+£4.50 UK Delivery or free UK delivery if order is over £35
(click here for international delivery rates)

Often it is assumed that Hitler’s panzers stormed into action perfectly formed, driving through the armies of the Poles in 1939 and the French in 1940 and defeating them. The dramatic blitzkrieg victories won by the Wehrmacht early in the Second World War – in which the panzers played a leading role – tend to confirm this impression. But, as Anthony Tucker-Jones demonstrates in this illustrated, comprehensive and revealing history of the panzers, this is far from the truth.

As armoured fighting vehicles the early panzers were no better than – sometimes inferior to – those of their opponents, but their tactics rather than their technology gave them an advantage. Later on German tank designers developed technically superior tanks but these could not be built fast enough or in sufficient numbers. For all their excellence, they were overwhelmed by the American Shermans and Soviet T-34s that were produced in their tens of thousands.

This is the story Anthony Tucker-Jones relates as he traces the evolution of the panzers from the modest beginnings in the 1930s to the Panzer IVs, Panthers and Tigers which were the most formidable German tanks of the war. Not only does he cover their design and production history, he also assesses their combat performance and gives a fascinating insight into the decision-making at the highest level which directed German tank design.

An excellent core of information on the development and combat histories of these mighty brutal metal beasts of war. All told, I really enjoyed reading them, and would definitely recommend them.

A curious and interesting book with a new perspective of study.

Anthony Tucker-Jones has delivered a book that gives you a complete history of the German Panzer tanks from 1933 to 1945 each one giving plenty of detail about its design completion it\'s faults and good points, from the Panzer I, Panzer II, Panzer III, Panzer IV, Panzer V Panther, Tiger I and Tiger II.\r\n\r\nThis title from Pen & Sword is very well written by the author Anthony Tucker-Jones it was very easy to pick up and read and quite hard to put down. It is filled with fascinating details, some of them opened my eyes. I enjoyed this book from Pen & Sword I find military history very interesting and this fits this type of interests, there are some pictures and what there is, are very good some of them I have not seen personally before. Is it a book for modellers, depends on the individual though I am a modeller and love the history, if similar to me then you will enjoy this title. But it is a book that people interested in the German Panzers, military history are going to enjoy.\r\n\r\nRead the full review here

I have really enjoyed this book, it is so informative and I can honestly say that I have learnt a lot from this. Coming from a person who is a bit of a beginner to the Panzer history, this has been a great and even entertaining read. Whilst this not a book for the real beginners I would say that people that know their stuff would get a lot out of it too. It’s a balanced and authoritative book that explains everything clear and well. I would certainly recommend this book and I give it a 4.5 out 5 stars.

From an acknowledged historian of armour and its employment, a detailed account of Hitler’s Panzers. This is a comprehensive history of the German Panzers with good photo-plate sections in illustration. – Very Highly Recommended.

I like the structure, and I agree with the author’s overall conclusions, especially on the Panther and Tiger tanks, which might well have been well armed and armoured, but that suffered from some many other problems that their impact on the war was very limited.

Hitler’s Panzers The Complete History 1933-1945 is a well-written book that covers all the basics of the German tanks and then some. It is a balanced account too: it will satisfy those who want an authoritative account while providing a platform for further study.

The author details the development and rise of the German Panzerwaffe (armoured arm) from the accession of Adolf Hitler to power in 1933. Through the secret deals with Russia to enable training of future panzer leaders and the development of the tactics, used to so much effect with the development of Blitzkrieg, starting with the experience in Spain and extending that through World War Two.

A terrific book by Anthony Tucker-Jones cataloguing the development and manufacture of Germany's iconic Panzer tanks.

This book is an intensely described analysis of the evolution and operational deployment of tanks by Germany in WW2. It provides in depth information on the design and construction of each tank and is an essential help to the subject. It needs determined application by the reader to see it through but as a ‘dip-in’ reference it is excellent.

The Panzerkampfwagen III Panzer III was one of the German army's principal tanks of the Second World War, yet its history is often overlooked in comparison to its more famous successors the Panzer IV, Panther and Tiger. Anthony Tucker-Jones, in this volume in the Images of War series, provides a visual account of the tank in over 150 wartime photographs and describes in a concise text its development and operational history. The Panzer III was designed as part of Hitlers re-armarment programme in the mid-1930's and played a key role in the German blitzkrieg offensives in Poland, France and the…