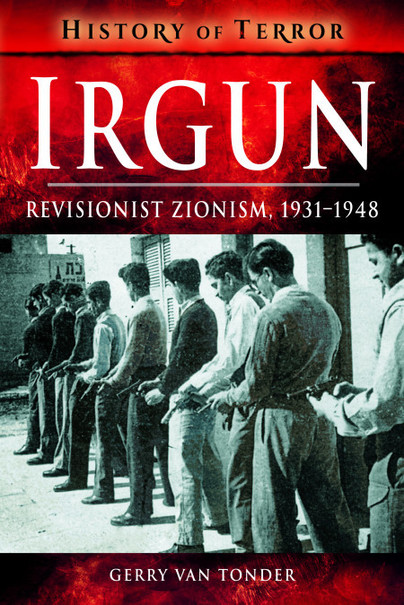 You'll be £4.99 closer to your next £10.00 credit when you purchase Irgun. What's this?
Need a currency converter? Check XE.com for live rates

In October 1944, the US Office of Strategic Services described the Irgun Tsvai Leumi – National Military Organization – as ‘an underground, quasi-military organization with headquarters in Palestine … fanatical Zionists who wish to convert Palestine and Transjordan into an independent Jewish state … advocate the use of force both against the Arabs and the British to achieve this maximal political goal’.

In 1925, Ze’ev Jabotinsky founded the Revisionist Zionism organization, whose secular, right-wing ideology would lead to the formation of the Irgun and, ultimately, of the Likud Party. Commencing operations in the British Mandate of Palestine in 1931, Irgun adopted a mainly guarding role, while facilitating the ongoing immigration of Jews into Palestine. In 1936, Irgun guerrillas started attacking Arab targets. The British White Paper of 1939 rejected the establishment of a Jewish nation, and as a direct consequence, Irgun guerrillas started targeting the British.

The authorities executed captured Irgun operatives found guilty of terrorism, while deporting hundreds to internment camps overseas. As details of Jewish genocide – the Holocaust – emerged, Irgun declared war on the British in Palestine. Acts of infrastructural sabotage gave way to the bombing of buildings and police stations, the worst being the bombing of the King David Hotel in Jerusalem – the hub of British operations and administration – in July 1946, killing ninety-one. Freedom fighters or terrorists – Irgun was only dissolved when the independent Jewish state of Israel was born on 14 May 1948. This is their story.

It is not easy to orient oneself in following both Arab and Israeli terrorist acts from the 30s until the proclamation of the State of Israel, but Gerry Van Tonder makes the narrative flow in a quick and exciting way. The actions of the Irgun and its even more extreme wing, the Lehi, today appear to us as the foundation of these 70 and more years of blood in those areas, but I believe that everything must be seen with sensitivity and in light of the actuality of the era, with news from Germany and Europe under the Nazi yoke. In this case the Irgun played a meritorious role by bringing refugees to Israel both to save them and to strengthen their ranks. On the other hand, the British were faced with a situation in which they could only come out of as losers, trying to mediate between two peoples who still struggle to find balance and coexistence. The history of the Irgun and Lehi is a story of violence, of terror, above all for the methods that are those of the guerrilla and the attack to innocent people. But if seen in the perspective of a "war of liberation" perhaps they are in a sense decisive and effective results. The thin line between "terrorists" and "freedom fighters" has been passed several times in one direction and in the other by members of the Irgun. This is their story.

This is an informative and dramatic account of the Irgun (“National Military Organization”), a leading dissident Jewish terrorist organization of the pre-1948 Israeli State.

A key book to understanding the formation of the IRGUN and the blood sweat and tears that went into the establishment and protection of the Jewish Homeland.

They are both [The Shanghai Massacre] from the History of Terror series, and both are sobering to read due to the nature of the subjects. Both are written well and sensitively, and as both subjects could be seen as politically controversial, they are written in my view objectively... For those with an interest in human psychology and behaviour, as well as the historical events captured in each book, these books make recommended reading.

Engaging in content, style and lavishly illustrated with photographs and contemporary newspaper articles. The book would be an excellent addition to the library of any reader who would like to educate themselves as to the real consequences of the British Foreign policy and the Balfour declaration.

Mr. Van Tonder has written an excellent guide to the "Irgun" (IZL), the Jewish revisionist group which later became the basis for today's ruling "Likud" party in Israel.
"Irgun" should be THE introduction to the subject, as it covers clearly and precisly virtually every subject related to that organization, which always had been the subject of a great debate among Jews in Mandatory Palestine and later Israelis, and considered a terrorist organization by the British. Van tonder explains the Ideological roots of Revisionist Zionism, and how it developed from its very pro-British Zionism to oppose Britain and the Arabs in Palestine; the Ideological divides among the Jewish population in Palestine regarding the "Irgun"; the IZL's organization and its operations. Van Tonder manages to describe rather than judge, and let the reader decide for himself. While he does note tactical mistakes or policy failures on all sides, he does not fall into the common trap of anachronism and manages to describe very well how people at that time saw and understood what happend around them, how they reacted and why did they do what they did. To that Van Tonder adds newspaper clippings and other contemporary sources which make for a very lively reading.

Of course, the book does not attempt to cover in minute detail every operation and aspect of the Irgun's struggle and the fight over mandatory Palestine. For example, while the Irgun is shown to be a very effective insurgent organization, the reasons which made it at the time more adept at killing British Soldiers than the IRA are not detailed - but this is hardly a complaint, as an in-depth analysis of every subject Van Tonder's excellent book covers would have made it a multi-volume, unaccessible book...
In the end, Mr. Van Tonder set out to explain the Story of the Irgun and the struggle over Mandatory Palestine to those who are interested in the subject but are not experts on it - and in this, he succeeded magnificently.