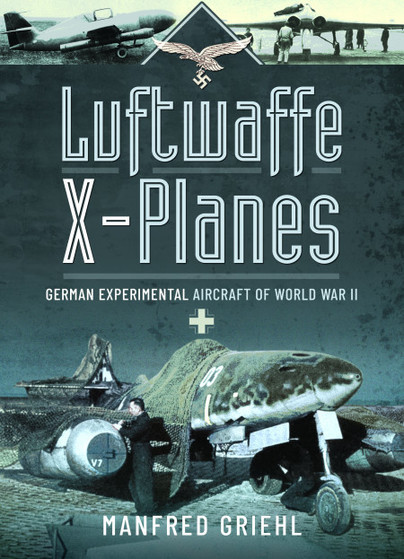 Add to Basket
Add to Wishlist
You'll be £9.99 closer to your next £10.00 credit when you purchase Luftwaffe X-Planes. What's this?
+£4.50 UK Delivery or free UK delivery if order is over £40
(click here for international delivery rates)

Even for those with a very extensive knowledge of the weird and wonderful aircraft devised by Germany leading up to and during WW 2 there will, almost certainly, still be some surprises to be found in this slim, but fascinating, volume.

From biplanes and bombers fitted with ramjets to rocket-powered ‘gliders’ and multifarious aircraft mounting experimental guided weapons, they are all here.

This is basically a visual record using many now-nostalgic contemporary photographs of amazing potential Luftwaffe aircraft and their testing; combined with a brief, but comprehensive, guide to the establishments which were earmarked to carry out their evaluations. Inevitably there were significant, and indeed, sobering losses in such a bizarre programme and these are also detailed in an appendix.

An intriguing addition to the bookshelf, capable of answering still-remaining gaps in the aircraft enthusiast’s knowledge of the period.

"...a great book to start a search for more esoteric German aircraft for scenarios..."