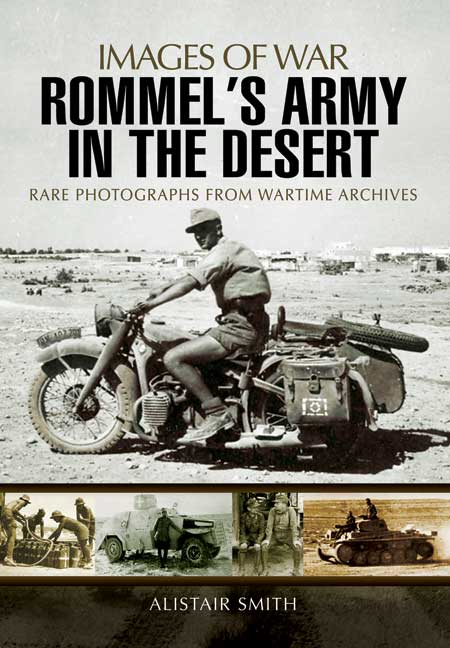 Rommel's Army in the Desert (ePub)

Click here for help on how to download our eBooks
Add to Basket
Add to Wishlist
Get Rommel's Army in the Desert (ePub) for FREE when you purchase 2 other eBooks.
Need a currency converter? Check XE.com for live rates

When German General Rommel and the lead elements of what would become the Afrika Korps landed in Libya in February 1941 nobody could have foreseen the legendary status they would achieve. Sent to support the faltering Italians, they were eventually able to drive the Allies to the very gates of Egypt. Fighting over hostile and rugged terrain, often outnumbered and outgunned, they were only finally undone by their defeat at El Alamein and Allied landings to their rear.

This collection of photographs are taken from the albums of three members of the vaunted Afrika Korps. For the first time the daily reality of the North African campaign can be seen from the German point of view. With numerous photographs of vehicles and men at work, this collection paints a portrait of the rugged and dangerous conditions as well as the harsh and brutal nature of desert warfare.

This book contains pictures from three original photo albums taken by unknown members of Rommel's army in North Africa, organised here into five chapters. The overall theme of all five chapters is live on the road in North Africa, and most pictures appear to have been taken while the photographers were travelling in convoys. There are also some pictures of naval transport, a smattering of captured British pictures and one of Vesuvius.

This is the second entry in the Images of War series to cover this topic that I have reviewed in the last few weeks. Rommel's Desert Warriors used photos from a wide range of sources to provide a photographic history of campaign. Here we have three individual views of the campaign, so we see more details of daily life in the desert, and fewer combat pictures. The two books work rather well together to give a picture of life and death in the North African desert.

The second new title in the ‘images of war series’ from pen and sword is this book looking at Rommel’s army in the dessert during world war two. Like all the books in the series it features a compilation of photos relating to the subject in question. However, there’s not a huge amount within the book to interest vehicle enthusiasts in terms of images of vehicles. If you’re looking for a relatively concise and well illustrated book that looks at German Africa Korps in the dessert that’s not too heavy on the text size and good value for money then you would do well to consider this new title from pen and sword, sadly though if you’re looking for vehicles in the dessert you’ll have to look elsewhere.