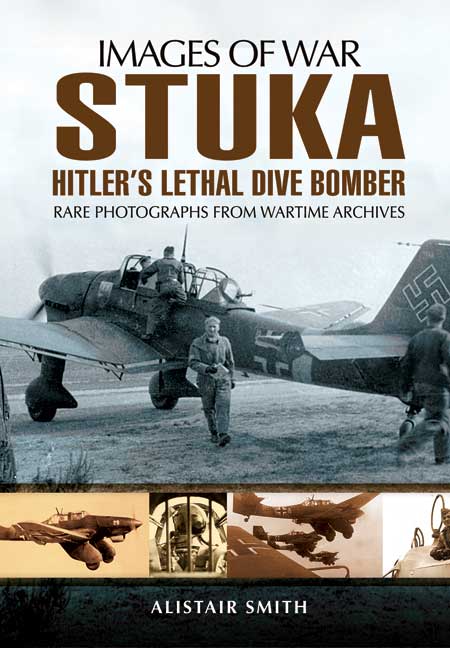 Click here for help on how to download our eBooks
Add to Basket
Add to Wishlist
Get Stuka: Hitler's Lethal Dive Bomber (ePub) for FREE when you purchase 2 other eBooks.
Need a currency converter? Check XE.com for live rates

The photographs in this collection belonged to Luftwaffe Stuka rear gunner and radio operator Erich Heine. The collection includes photographs of flights of Stukas in formation, operating training aircraft, and a selection of different Luftwaffe uniforms and flight gear. The photographer was based for a period in Czechoslovakia, was shot down over the Ukraine in August 1943 and for a time was listed as missing in action.

This collection offers a unique insight into the German experience of World War Two, providing the opportunity to access materials that have never been published before.

The book is set out in 7 chapters including photographic and time line narrative based on the early war years of Erich Heine who was a Stuka rear gunner and radio operator.The photographs are from a album collection that belonged to Erich.

The photographs are professional posed and snapshots taken by Erich or a squadron member.They show the life of Erich and Luftwaffe Stuka crew members through training /deployment/leave and include funerals of squadron members. The photographs end in the Summer of 1943.Erich survived the war.

The narrative gives a good overview of the Stuka in service and the photographs show varied views of the aircraft and day to day life within the squadron.The shots of Luftwaffe uniform and the Stuka in various ground and flight locations would be of interest to the modeller.The narrative around the Stuka detail an interesting insight into the use ,technical specification and deployment.

Overall the book details one mans Stuka squadron experience in pictures and the author has added numerous details of the Stuka and associated deployment which ties in well with the photographs.

The Quality of the images is generally very good… The book very ably documents the war career of the aircraft and the pilots, reproducing some outstanding images of war.

This latest addition to the ever-popular Images of War series contains unique unpublished wartime photographs relating to the infamous aircraft Stuka. The original pictures were taken by Erich Heine, a Stuka gunner and radio operator. The most remarkable thing about this album is that it contains photographs of perhaps the most famous Stuka ace, Hans-Ulrich Rudel. The photographs featuring Rudel in this album are obviously of an early period.

This is a very nice release about the most recognizable German aircraft of the Second World War with a nice selection of photographs .
Highly recommended