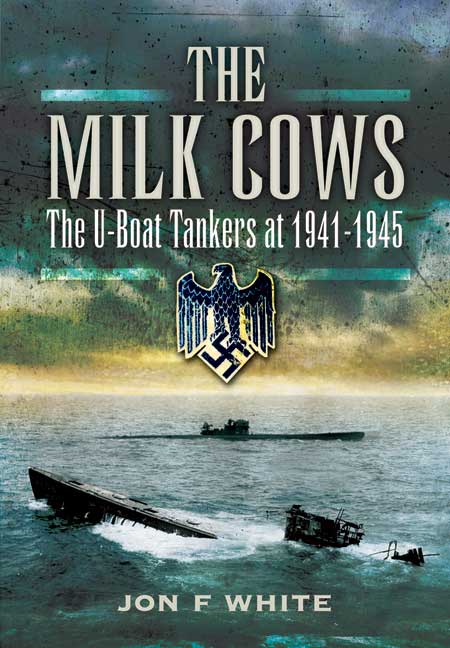 Click here for help on how to download our eBooks
Add to Basket
Add to Wishlist
You'll be £4.99 closer to your next £10.00 credit when you purchase The Milk Cows. What's this?
Need a currency converter? Check XE.com for live rates

During the Second World War the Germans developed a specially adapted U-boat oil tanker with two aims. First, by refuelling the attack U-boat fleet their range of operations and duration of patrol could be significantly increased. Secondly, these underwater tankers were far more likely to avoid detection than surface support ships.

The submarine tankers, affectionately known as 'Milk Cows', were regarded by both the Germans and the Allies as the most important element of the U-boat fleet. Allied forces had orders to attack the tankers first whenever a choice was presented.

Until late 1942 the German Milk Cows operated with great success and few losses. But from 1943 onwards the German rendezvous ciphers were repeatedly broken by the Allies and losses mounted rapidly. The Milk Cows were highly vulnerable during the lengthy refuelling procedure as they lay stationary on the surface, hatches open. By the end of the war virtually every tanker had been sunk with severe loss of life.

The story of this critical campaign has been thoroughly researched by the author and is told against the background of changing U-boat fortunes.

During World War Two the German navy operated special supply U-boats which carried mainly fuel, but also mechanical spares, a bakery, even a doctor, and relief crew members. Their object was to extend the range and ' duration of the Wolfpacks deadly patrols. The U-boat crews were afforded the best food of all the armed forces, and these U-tankers even had a cold room for fresh food, and stocks of chocolate, a luxury almost unknown outside the U-boat arm. These vital tankers were initially very successful, though refuelling on the surface made them sitting ducks. The 'Milk Cows'gave the German U-boats the range to operate in every ocean, even off Australia and in the Arctic. Good to read about some French dockyard sabotage too, slave labour fight ing back. Once Bletchley had broken the German ciphers which gave the refuelling locations, these sup-try submarines were hunted down to virtual extinction. The casualty rate of the U-tanker crews was rightful, and with none of the attack boats glory of sinking ships. Though there is no doubt they were in-irectly responsible for a considerable proportion of the 14 million tons of Allied shipping sunk by U-tats. The author is to be congratulated on his research and writing such a thorough and readable account i such an interesting subject.
The Milk COWS by John F White

Readers will be fascinated not just by the mainstream replenishment work but by also by the book's accounts of German submarine operations far afield, including the interface with the Japanese, liaison with whom was a significant U-boat activity. Penang in Malaya and Tjikopo in the Dutch East Indies were important, if unlikely, U-Boat bases.
This is a most worthwhile book and a most worthy addition to the literature on the U-boat war.