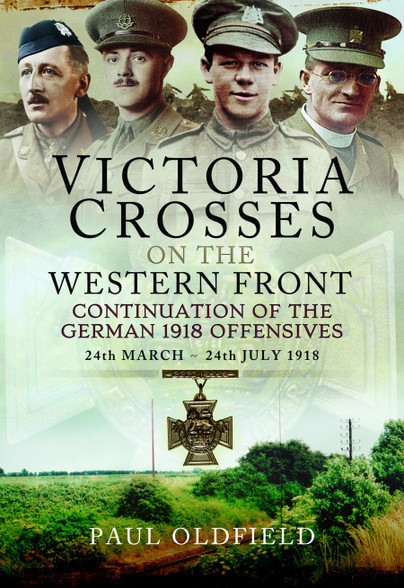 Add to Basket
Add to Wishlist
You'll be £24.00 closer to your next £10.00 credit when you purchase Victoria Crosses on the Western Front – Continuation of the German 1918 Offensives. What's this?
+£4.50 UK Delivery or free UK delivery if order is over £35
(click here for international delivery rates)

Review by John A. Hargreaves

Paul Oldfield’s 775-page extensively researched compendium Victoria Crosses on the Western Front – Continuation of the German 1918 Offensives: 24 March – 24 July 1918 is a supplementary volume to the ten-part Victoria Crosses on the Western Front to which the author has also contributed several volumes. Designed ‘for the battlefield visitor as much as the armchair reader’ it fills a very specific purpose both in terms of its chronological scope and its exploration of the related military context. It aims to provide a ‘thorough account of each successive ‘Victoria Cross action’, each of which are precisely set within ‘the wider strategic and tactical context’. Clear and detailed sketch maps show the geographical area which the visitor sees today with ‘the battle-lines and movements of the combatants superimposed’. A profusion of black-and-white photographs of the battlefield sites have been carefully selected to enhance the informative textual commentary.