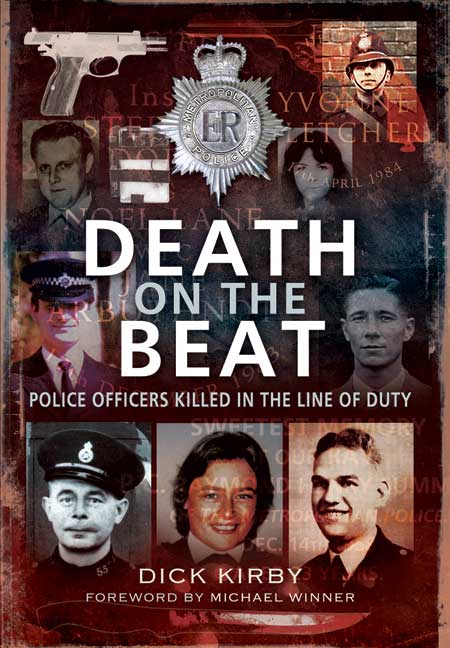 Death on the Beat (ePub)

Click here for help on how to download our eBooks
Add to Basket
Add to Wishlist
You'll be £4.99 closer to your next £10.00 credit when you purchase Death on the Beat. What's this?
Need a currency converter? Check XE.com for live rates

There is little that shocks the British public more than the killing of policemen and women whilst tackling criminals. Even hardened crooks baulk at what is seen as the ultimate crime particularly in the days when the police were largely unarmed.

Death on the Beat looks at fifty years of crime enforcement through case studies to demonstrate the ever present danger to those who patrolled London’s streets and paid with their lives. Many who died were carrying out routine duties. PC Nat Edgar was shot in 1948 by a burglar and PC Patrick Dunne was murdered investigating a domestic incident in 1993; it took thirteen years to bring his killer to justice. Detective Sergeant Ray Purdy was shot arresting a cheap blackmailer and PC Ray Summers stabbed to death breaking up a gang fight. Particularly shocking was the gunning down of the three-man crew of the ‘Q’ car in 1966.

Terrorism brought more deaths. The IRA were responsible for the murder of PC Stephen Tibble and the horrific bombing of Harrods which cost three brave police officers their lives. The case of WPC Yvonne Fletcher, shot from inside the Libyan Embassy in 1984, remains highly contentious.

Acclaimed crime writer and former Met detective, Dick Kirby has drawn deep on his knowledge and contacts within and outside the Metropolitan Police to get first-hand accounts of these crimes, the ensuing investigations and the aftermath for those affected directly.

Written in his no-holds-barred and authoritative style, Death on the Beat, Dick’s ninth book, promises to be the best yet.


This is not a good book, it is a great book with each chapter catching the imagination of the reader from start to finish. A very highly recommended read".

...another excellent book by the redoubtable Dick Kirby ... Nobody reading this book can fail to be sobered and impressed by the courage and humanity of the men and women working to keep our streets safe for us.

An extremely well-researched and well-written book. Thank you, Dick Kirby, for placing your extensive research before us all in an informed read.

Dick Kirby, as we’ve seen over the past few years has used the time profitably, writing a series of books on aspects of the history of crime-fighting. This book covers 50 years of crime enforcement and describes in detail the constant danger to the police who have patrolled London’s streets.

Rarely, if ever, have I been so captivated and moved by a book ... the way in which Mr Kirby has gone about it is exceptional. The straight and factual style works superbly, putting the reader there on the scene of these tragedies as they developed.

Latest book by ex-Sweeney mainstay-turned-author remembers officers who have made the ultimate sacrifice. The result is Death on the Beat – a study of 10 stories of courage spanning some 50 years and highlighting the ever-present danger to those who take up the vocation of policing.

Death on the Beat ... was extremely well researched and gives the reader a little insight into the working lives of everyday police officers responding to emergency calls or situations and an understanding that their lives can be taken in ‘the blink of an eye’. This book ... outlines the demanding and difficult tasks that police officers have to respond to on a daily basis and in some cases, the outcome is extremely tragic and sad. Well done, Dick Kirby

Dick Kirby, a former Flying Squad officer who has ‘walked the talk’ writes ...with his usual trademark humour, twinned with impeccable research. This is a fitting tribute to the many officers killed in the line of duty and exemplifies how the pain felt by their families and friends continues to this day.

Dick Kirby, as we’ve seen over the past few years has used the time profitably, writing a series of books on aspects of the history of crime-fighting. This book covers 50 years of crime enforcement and describes in detail the constant danger to the police who have patrolled London’s streets.

...it was written from the heart. I found it captivating and the chapter on the Harrods bombing, very emotional and moving. I cannot remember such detail being written about each episode and it without doubt opened my eyes to the reality of each case and the lasting effects it still has on this ‘old hand’.

"I really enjoyed reading what happened in the end to those who took part, their careers, the families of those who died, where the officers are buried and the memorials now in place. It’s details like this that make the end of the story so interesting. A fitting tribute to those officers and their families who died doing their duty."

A gripping read detailing the most sad and tragic days suffered by the Police Service, which has been written with insight, knowledge and compassion. You cannot help but be moved by the individual accounts of the deaths on duty of those who protect us.