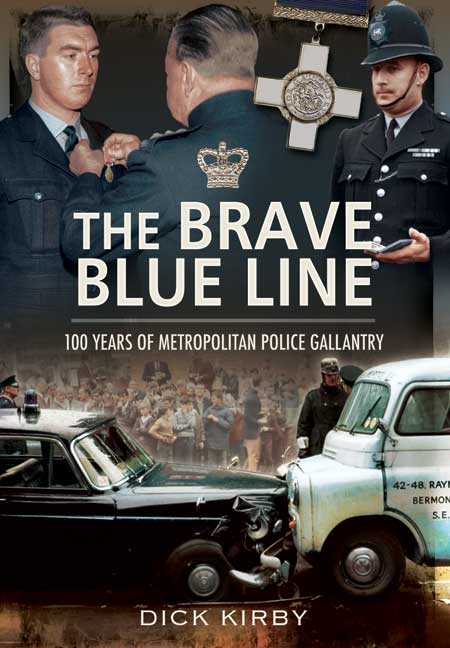 Click here for help on how to download our eBooks
Add to Basket
Add to Wishlist
You'll be £4.99 closer to your next £10.00 credit when you purchase The Brave Blue Line. What's this?
Need a currency converter? Check XE.com for live rates

In their daily battle against a remorseless tide of crime, officers of London's Metropolitan Police routinely risk their lives protecting the Capital. In The Brave Blue Line Dick Kirby, the former Scotland Yard detective turned popular
crime author, has brought together a superb collection of inspiring stories of police gallantry over the last hundred years.

Officers to be honoured with the George Cross, the highest civilian award, have their stories told including Jim Beaton who saved Princess Anne from kidnap in The Mall.

Three women officers have been awarded the George Medal, two for decoy work, the third for a heroic rooftop rescue.

The book concludes with the astonishing story of a retired detective who tackled armed robbers – at the cost of his eye. He may have left the Met behind him but not his courage.

Every page of this gripping book with its thrilling and well researched accounts of outstanding acts of gallantry by policemen and women makes for inspiring reading. This is crime writing of the highest order.

‘Through a series of gripping individual stories, the author highlights the incredible courage often shown by officers on the front line. It is the author’s moral passion that helps to make this such a compelling book. He also has an easy style and dry turn of phrase ... There is a wealth of marvellous period detail in the descriptions, conjuring up images of a vanished world ...

The Brave Blue Line by Dick Kirby is the latest in his line of slick, fast-moving true crime stories. His tales of police valour are all documented, verifiable and best of all, told by a man who has ‘been there and done that’, himself. Add to that his black humour, which is the common language of all long-serving CID officers, makes this book a great read and it really invites a TV producer to pick it up.

The attention to detail to all aspects is first-class.  This book is a must for anyone interested in the award of decorations.

Get a copy of The Brave Blue Line and then urge friends and acquaintances to do the same. It’s a well-written, well-presented book that really does deserve the widest-possible audience

Once again, Dick Kirby has written a most interesting and readable book and together with his style of writing means that when you pick it up, you just don’t want to put it down. He must surely be the most prolific writer of non-fiction police books in this country

I found this latest book, the best yet. The book is factual, I know of – and worked on – several of the cases mentioned. Well done, a really good book written by a really good detective – appreciated by a detective. Keep up the splendid work.

Kirby contributes to newspapers and magazines on a regular basis, as well as appearing on television and radio. The Guv’nors, The Sweeney, Scotland Yard’s Ghost Squad, Brave Blue Line, Death on the Beat, Scourge of Soho, Scotland Yard’s Flying Squad, London’s Gangs at War, Scotland Yard’s Gangbuster, The Mayfair Mafia, Scotland Yard’s Murder Squad, The Racetrack Gangs and IRA Terror on Britain’s Streets 1939 -1940 are all published under the Wharncliffe True Crime imprint and he has further other published works to his credit. On retirement he lives near Bury St Edmunds, Suffolk.