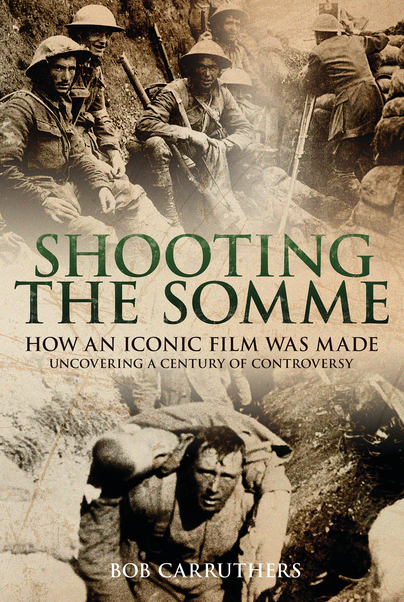 How an Iconic Film was Made

Add to Basket
Add to Wishlist
You'll be £25.00 closer to your next £10.00 credit when you purchase Shooting the Somme. What's this?
+£4.50 UK Delivery or free UK delivery if order is over £35
(click here for international delivery rates)

In 1916, the British High Command allowed two camera-men to film the ‘big push’, the long awaited British attack on the German trenches. The men chosen to film the battle were Geoffrey Malins and John McDowell. Together they shot the material for a feature length documentary. The result was The Battle of the Somme; the first ever war film. It was rushed through production and was released into British cinemas in 1916, at a time while the battle was still continuing. The Battle of the Somme was a surprisingly candid and gritty film

which showed the full horror of life in the trenches. The film caused a sensation and crowds flocked to cinemas to witness the grim reality of the war. However, controversy soon followed, and rumours began to circulate that some scenes had been faked. Now over 100 years later, Bob Carruthers retraces the footsteps of Malins and McDowell in order to discover how much of the film was indeed real and how much of the film was faked for the cameras. In the process this powerful new book uncovers the century old secrets of the original filmmakers and finally reveals the truth behind how much of the film was actually simulated. The conclusions are startling and unexpected. The second part of this book features Geoffrey Malins’ recollections as published in his controversial book How I Filmed the War.

Throughout the book, great photographs compliment the story told of these films, including filming the preliminary bombardment, 1st July, 1916, men carrying film in the early days of the war, as well as the Prince of Wales trying to locate a camouflaged camera. These images, and more, give testimony to the remarkable job these men did under un relenting circumstances from which their legacy, today, is there for all. If you were to select thirty key books to have on your bookshelf in relation to the Battle of the Somme then there is no question this piece of work by Carruthers should be there.

Carruthers painstakingly traces through the film and identifies which elements were real and which weren't.... I found the book interesting.

This book provides the first balanced review of how this groundbreaking film was shot, edited and
presented, including details of how some scenes were manufactured. - Highly Recommended

Fascinating book & the additional detail is most welcome.

This new book takes on a topic which does make for some interesting reading. It is actually in two halves, as the first examines the story behind the film and the controversy while the second half is the book written by one of the film-makers who was directly involved in the actual filming.

This volume fills an important gap in cinematic history and the author is to be congratulated on his efforts.