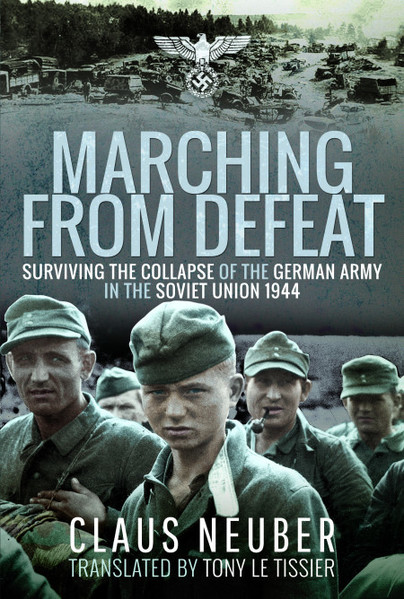 Add to Basket
Add to Wishlist
You'll be £19.99 closer to your next £10.00 credit when you purchase Marching from Defeat. What's this?
+£4.50 UK Delivery or free UK delivery if order is over £35
(click here for international delivery rates)

"This is an amazing account of escape and evasion in the face of mortal danger aided by the kindness of strangers and good luck".

Once he returned he wrote down his experiences in 1944, and after the war this writing was made into this current book. This version was then translated into English by Tony Le Tissier to make it available to a wider public. What makes it interesting is Neuber’s single-mindedness during his journey and the fact that he, despite all setbacks, did not give up and was able to reach his own position.

The personal account of a young artillery officer of the chaos of the final days of WWII on the Eastern Front and the struggle for survival. The author tells his personal story against a graphic picture of the final stages of WWII and the collapse of Army Group Centre. – Very Highly Recommended

This offering from Pen and Sword tells the story of a German soldier and his struggle, plus his loses to escape encirclement, during Operation Bagration. Anyone who has an interest in World War II should take the time to read this book, as unlike books that tell you about the conflict, this tells you about the men. That fought and died doing their duty as they saw it. The result of all this is a truly engaging read that brings you closer to the men who were there.

Overall, a thrilling book to read, well written and exciting. A remarkable account of survival behind enemy lines by a 20 year old German soldier.