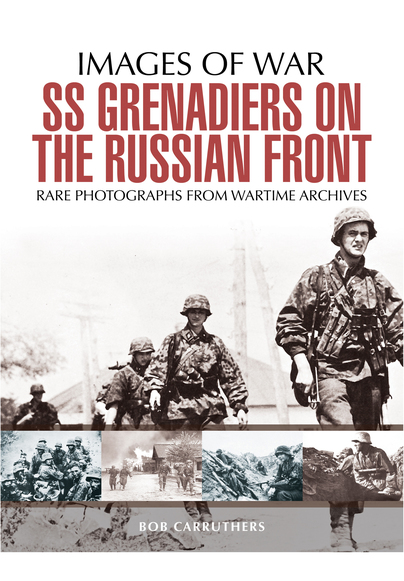 Click here for help on how to download our eBooks
Add to Basket
Add to Wishlist
Get SS Grenadiers on the Russian Front (ePub) for FREE when you purchase 2 other eBooks.
Need a currency converter? Check XE.com for live rates

This is the photographic history of the Waffen-SS and its decline from triumph into disaster is told through these powerful images, which vividly document the reality of combat in the East from 1941-1945.
These rare images capture the combat history of the Waffen-SS in the East, and traces the downward curve from the optimism of the opening stages of the war through the challenges of Barbarossa, to the long and bloody retreat pursued by a numerically superior enemy. The final chapter id their ignominious defeat at the hands of the Red Army. This powerful photographic record is essential reading for anyone with an interest in the role played by the Waffen-SS in the East.

You will fine great photos that are well captioned providing us an insight into the life on the Eastern Front of the SS Grenadier. Diorama builder is will love this for inspiration and general military readers will love it for its vast selection of images.

The author offers us a vision of the conflict through a wonderful collection of 242 black and white photographs, distributed throughout the work with their corresponding annotations by foot.

An interesting book with unpublished visual documentation of great value.

It is often easy to forget about the importance of infantry in battles particularly when both historians and the popular media tend to focus on the famous Panzer divisions and individual vehicles like the Panther and Tiger tanks. Notwithstanding their much well-deserved reputation as spearhead elements that brought about much early stage success to Germany during Operation Barbarossa, I advise readers to not neglect the tactical significance of the grenadiers, whose help was absolutely quintessential in ensuring that the Panzers could advance without fears of mass enemy infantry assaults. In this regard, I believe that the book would have been even more noteworthy had it included a larger number of photographs showing infantry and tank coordination. Nevertheless, these very minor shortfalls do not in any way mitigate the outstanding utility of Carruthers’ book as a source of rare photographs that reveal much about the equally admired and vilified Waffen-SS grenadiers.

This is an excellent approach from the collector's point of view, as it puts military artefacts - especially the weapons - into their proper context.

It is always enlightening to see the variety of firearms pressed into service by the Germans. Modeller, re-enactors, museum curators and those interested in historical accuracy will also find these images of great use in bringing greater realism to their displays.

A new addition to the Images of War series, extending the coverage of the Waffen SS. The text is confined to a brief but informative introduction and to photo captions. The strength of the book is in the outstanding selection of images.

Plenty of good references for modellers, sculptors and re-enactors in here once more as the story of the Waffen SS seems to continue to fascinate.